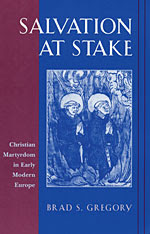 Thousands of men and women were executed for incompatible religious views in sixteenth-century Europe. The meaning and significance of those deaths are studied here comparatively for the first time, providing a compelling argument for the importance of martyrdom as both a window onto religious sensibilities and a crucial component in the formation of divergent Christian traditions and identities.

Gregory explores Protestant, Catholic, and Anabaptist martyrs in a sustained fashion, addressing the similarities and differences in their self-understanding. He traces the processes and impact of their memorialization by co-believers, and he reconstructs the arguments of the ecclesiastical and civil authorities responsible for their deaths. In addition, he assesses the controversy over the meaning of executions for competing views of Christian truth, and the intractable dispute over the distinction between true and false martyrs. He employs a wide range of sources, including pamphlets, martyrologies, theological and devotional treatises, sermons, songs, woodcuts and engravings, correspondence, and legal records. Reconstructing religious motivation, conviction, and behavior in early modern Europe, Gregory shows us the shifting perspectives of authorities willing to kill, martyrs willing to die, martyrologists eager to memorialize, and controversialists keen to dispute.

The She-Apostle: The Extraordinary Life and Death of Luisa de Carvajal by Glyn Redworth. From the Oxford University Press website:

Before dawn one morning in June 1612, an elderly Frenchman took charge of a carriage carrying a precious cargo near Tyburn Fields, London's notorious place of execution. It was heading for a house in Spitalfields, where a wizened Spanish woman was waiting to receive the mortal remains of freshly-martyred Catholic priests. Her name was Luisa de Carvajal and this book tells her story.

Born into a great Spanish noble family, Luisa suffered a horribly abusive childhood and from her early years hankered to become a martyr for her faith. For almost 20 years she struggled to become possibly the first female missionary of modern times. In 1605 - the year of the Gunpowder Plot - she was secreted into England by the Jesuits, despite the fact that she spoke not a word of English. To everyone's surprise including her own, she steadily assumed a prominent role within London's underground Catholic community, setting up an unofficial nunnery, offering Roman priests a secure place to live, consoling prisoners awaiting execution, importing banned books, and helping persecuted Catholics to flee abroad. Throughout this time she ran the grave risk of imprisonment and execution, yet she miraculously managed to avoid this ultimate fate in spite of being arrested on a number of occasions. This vividly written biography, the first to give equal treatment to her double life in Spain and England, is based on Luisa's own autobiographical writings, her sparkling collection of poems and letters, and the detailed reminiscences by dozens of people who worked with her. In parts humorous, the book contains Luisa's biting descriptions of the cost of living in Shakespeare's London, the poor quality of food in the capital, as well as the weekend rowdiness of the English.

I'll let you know what I think of them soon. What are you reading?
Posted by Stephanie A. Mann at 2:16 AM