John Carroll and the Carroll Family 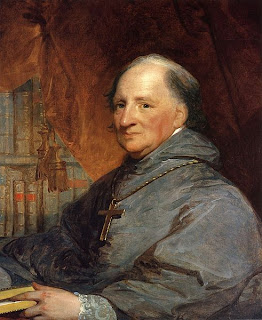 Hearing Kevin Schmiesing on the Son Rise Morning Show Monday morning, I was reminded that John Carroll, former Jesuit, became the first Catholic bishop in the United States of America on November 6, 1789. His older brother Daniel was one of only two Catholics to sign the Constitution and one of only five men who signed both the Articles of Confederation and the Constitution. His cousin Charles Carroll of Carrollton was the only Catholic who signed the Declaration of Independence and also served as the first Senator from Maryland.

I've mentioned the Carroll family before on this blog and I include Maryland, the Calverts (Lords Baltimore), and the attempt to establish a colony in the New World where the colonists could be loyal both to their sovereign and their Church in several chapters of Supremacy and Survival: How Catholics Endured the English Reformation. The link between the Carrolls and the English Reformation begins with the Jesuit College of St. Omer in what is now France, but was then the Spanish Netherlands (roughly today's Belgium). Robert Parsons/Persons, SJ founded the College for the education of England Catholic boys who could not otherwise receive a Catholic education. Charles, Daniel and John all attended the College at St. Omers, which subsequently moved to Bruges, Liege and finally to Stonyhurst in England (!) because of unrest in those continental areas.

John Carroll continued his education in the Jesuit seminary and was ordained in 1769 and finally returned to Maryland as a missionary priest in 1773, after Pope Clement XIV suppressed the Society of Jesus. With his cousin Charles, he accompanied Samuel Chase and Benjamin Franklin to Quebec on the Continental Congress's attempt to gain French (Catholic) Canadian support for the Revolution in 1776. Once colonial independence had been won from Great Britain and eventually religious freedom assured by the Constitution, Catholics had greater freedom in the new United States of America. Archbishop Charles Chaput describes the reasons for Charles Carroll's support of the Revolution and the Constitution in his book, Render Unto Caesar: Serving the Nation by Living our Catholic Beliefs in Political Life, (Chapter Five. The American Experiment)--I'm attending a book group at Eighth Day Books reading and discussing this book weekly.

Carroll was elected the first Catholic bishop on November 6, 1789 by the clergy (24 out of 26 voted for him) and his selection was approved by Pope Pius VI. The next year Carroll was ordained in England and then took up his see in Baltimore, Maryland. Among his accomplishments were the founding of Georgetown University, holding the first diocesan synod in 1791, and building the first Catholic cathedral in the United States, now the Basilica of the National Shrine of the Assumption of the Blessed Virgin Mary. He laid the cornerstone but did not live to see it completed. Pope Pius VII raised Baltimore to the Archdiocesan level, and Carroll as its first Archbishop, overseeing bishops in Boston, New York, Philadelphia, and Bardstown, Kentucky. Archbishop John Carroll died on December 3, 1815 and he is buried in the cathedral he founded--more detail on his life here at its official website. You might note the location of his ordination as bishop--England. The Catholic Church in the colonies had been under the leadership of the ordinaries of England, specifically the Vicars Apostolic. It was Bishop Richard Challoner who wrote to Carroll in 1773 about the suppression of the Jesuits, and Benjamin Franklin even opined that the Catholics of the new USA should rather be led by French bishops.

This connection between the Carrolls and the struggles of Catholics in England to secure freedom of worship and religious conscience after the English Reformation fascinates me, especially as I see -- per Archbishop Chaput's book cited above -- that this is really an ongoing struggle for balance and justice between Church and State in every nation and society. John Carroll and the Carrollton family made great contributes to that balance and justice and I think it's good to remember the election of the first Catholic bishop in the United States of America (even though it's a little late!)
Posted by Stephanie A. Mann at 2:19 AM