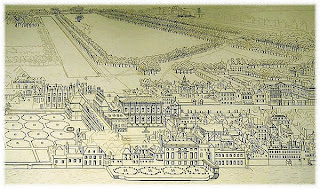 On November 30, 1554, Reginald Cardinal Pole, the Papal Legate, soon to be Archbishop of Canterbury, received the submission of the English Parliament and granted absolution to the entire kingdom, reconclining England to the Holy See and the universal Catholic Church. As both Alison Weir and H.F.M. Prescott comment in their biographies of Mary I, the first Queen Regnant of England and Ireland, this must have been one of the happiest days of her life as she witnessed this solemn act. She was married to Philip of Spain, her cousin had returned, Parliament and Convocation were both repenting of the acts led by her father and her half-brother to separate England from the Catholic Church--and she believed she was pregnant (as her doctors had told her).

For this day to occur, several things had to be arranged and decided. First of all, for the Papal Legate to arrive in England, the Act of Attainder against Reginald Pole had to be removed by Parliament. This was the Act that condemned his mother Margaret Pole, Countess of Salisbury, and many others to death. Parliament lifted this sentence of death and Mary invited the Papal Legate to return from exile on November 20, 1554. He would be the first Papal Legate present in England since the trial of her mother's marriage in 1529--when Katherine of Aragon appeared before Cardinal Campeggio and Cardinal Wolsey, appealed to Henry her husband and left the Court, impervious to pleas to return.
The matter of former Church lands also had to be decided: Henry VIII and then Edward VI had seized the monasteries and then the chantries and the chantry schools, destroyed most of them, sold or given the lands to courtiers and others who benefitted. Were these all to be given back?
The Papal Legate wanted them back, but Mary was more concerned about alienating the Court and nobility her reign had so lately unified against the plots of Northumberland to replace her in the succession with Lady Jane Grey and that of Thomas Wyatt the younger to prevent the Spanish marriage and place her half-sister Elizabeth and young Edward Courtenay on the throne. So the lands and property stayed with their current owners.
On November 28 Cardinal Pole spoke to Parliament and asked them to repeal all the other acts that were obstacles to reunion. On November 29 Parliament did so and then petitioned Queen Mary to intercede with the Papal Legate for absolution and reunion with Rome (two members refused to sign the petition).
Then on St. Andrew's Day Stephen Gardiner, Bishop of Winchester and Mary's Chancellor, led the members of both houses of Parliament to kneel before the Papal Legate and Mary, presenting the petition. The petition proclaimed that Parliament was "very sorry and repentant of the schism and disobedience committed in this realm against the See Apostolic" and begged to be returned "into the bosom and unity of Christ's Church."
Cardinal Pole then welcomed "the return of the lost sheep" and granted absolution to the entire kingdom, proclaiming a new Holy Day on November 30: the Feast of Reconciliation.
As readers might remember, not quite two weeks ago (November 17) I posted a reflection on the day this Catholic revival ended in England when Mary and Pole died on the same day in 1558. They did not live long enough to celebrate the fourth anniversary of this great day! This event took place in the Palace of Whitehall which Henry VIII had taken from Cardinal Wolsey after his fall. Whitehall, except for the Banqueting Hall, burned down in 1698.
Posted by Stephanie A. Mann at 2:07 AM