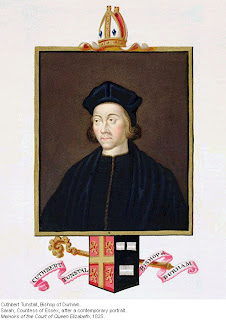 On November 18, 1559 Cuthbert Tunstall, the former Bishop of Durham, who refused to take Elizabeth I's Oath of Supremacy, died under house arrest at Lambeth Palace, the "guest" of Matthew Parker, Archbishop of Canterbury. As his biography describes, he managed to weather the stormy seas of religious change through the reigns of Henry VIII, Edward VI, and Mary I.

I guess he reached a "tipping point" when faced with another oath that would allow the monarch to change religious practices in England. He had been one of Queen Catherine of Aragon's legal counsel for the Blackfriar trial, but unlike Bishop John Fisher, Thomas Abel, Richard Fetherston, and Edward Powell, he did not suffer imprisonment or execution (obviously). Tunstall accepted Henry's Supremacy while maintaining loyalty to Catholic doctrines--but he must have begun to see that without the established authority of the Pope, the Church in England was just a feather in the wind.

Tunstall did protest against the Calvinist Reformation during Edward VI's reign, and ended up under house arrest and ultimately in the Tower of London in 1551 and was deprived of his bishopric in 1552. He was then freed when Mary I succeeded and restored to Durham. When Elizabeth I came to the throne he recognized the error of the royal supremacy and refused both to take the new Oath of Supremacy or to participate in the consecration of Matthew Parker as Archbishop of Canterbury.

It must been a little awkward to be held under house arrest by the same man he'd refused to recognize, but he did not have to endure the discomfort very long.

This website summarizes his written works and his survival during the Tudor Reformation thus:

His works, exclusive of published letters and sermons, are: "De Arte Supputandi Libri IV" (London, 1522); "Confutatio cavillationum quibus SS. Eucharistiae Sacramentum ab impiis Caphernaitis impeti solet" (Paris, 1552); "De veritate Corporis et Sanguinis Domini in Eucharistia Libri II" (Paris, 1554); "Compendium in decem libros ethicorum Aristotelis" (Paris, 1554); "Certaine godly and devout prayers made in Latin by C. Tunstall and translated into Englishe by Thomas Paynelle, Clerke" (London, 1558). Much of his political correspondence is preserved in the British Museum. Despite his weakness under Henry VIII, we may endorse the verdict of the Anglican historian, Pollard, who writes: "Tunstall's long career of eighty-five years, for thirty-seven of which he was a Bishop, is one of the most consistent and honourable in the sixteenth century. The extent of the religious revolution under Edward VI caused him to reverse his views on the royal supremacy and he refused to change them again under Elizabeth".
Posted by Stephanie A. Mann at 2:19 AM