The Surrender of Fountains Abbey: November 26, 1539 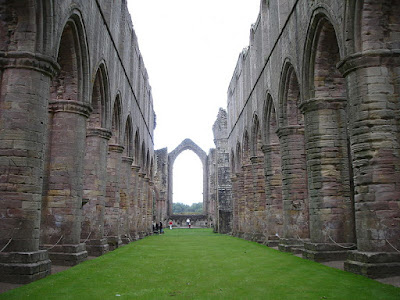 Fountains Abbey was surrendered to Henry VIII and Thomas Cromwell's agents on November 26, 1539. As this site notes, it had a very close connection to the Pilgrimage of Grace:

Huby's successor, William Thirsk, was not as wise as Huby, nor as virtuous. He is said to have sold land, timber and jewels belonging to the abbey for his own use. Admittedly, however, this accusation is biased, as it relies entirely on the evidence supplied by Thomas Cromwell's agents during the Visitation of the Monasteries in 1536. Cromwelll, Henry VIII's chief minister, had begun to take account of the riches that the monks had secreted behind their monastery walls, and to look for ways to relieve them of it. Cromwell's protestant zeal and his practical desire to please the king were united behind the cause of showing the monks to be corrupt and superstitious. Thirsk was forced to resign as abbot and went to live at the nearby abbey of Jervaulx. Instead of living quietly on the pension that he had been provided with, however, Thirsk became involved with the Pilgrimage of Grace. This was a revolt led by Northern Catholics in 1536, who sought to force Henry VIII to return to the Catholic Church, reopen the abbeys and get rid of Protestant reformers. Henry VIII, however, was not to be stopped. Thirsk and the Abbot of Jervaulx were sent to the Tower of London, where they were both found guilty of treason and suffered traitors' deaths -- hanging, drawing and quartering.

Although the monks at Fountains were innocent of complicity in the revolt, the days of the monasteries were numbered. In 1539, all the monasteries of England were suppressed, their lands and buildings sold and their contents stripped away. The greatest Cistercian abbey in the kingdom was chopped up and dispersed. Today the abbey still tells a mute tale of its butchery. The great nave is roofless, its lead sold to the highest bidder. There are holes through the masonry where lead piping once ran; sockets and corbels where timbers once rested; empty spaces once filled by glass that was transported to Ripon and York. The abbey doors can be seen in a nearby mill (the only example of a Cistercian corn mill in the country), where they were used as flooring. The Elizabethan house nearby -- Fountains Hall -- was built with stones torn from the abbey walls.

The community signed a surrender deed on November 26, but the document has not survived. The abbot, Marmaduke Bradley, received an annuity of 100 pounds, the prior, Thomas Kydde, 8 pounds, and each of the 30 monks 6 pounds.

This site contains a wealth of information about the Cistercian abbeys in Yorkshire and offers this detail of the Crown's takings from Fountains:

An inventory was taken and a valuation of the abbey and its lands made. Fountains was valued at £1115 18s 2d, making it the wealthiest Cistercian abbey in the country, although this was considerably less than the great Benedictine houses such as the abbeys of Westminster and Glastonbury, which had a net income of £3470 and £3311 respectively; St Mary’s, York, had a net income of £1650. Still, Fountains offered rich pickings for the Crown. There were fine ecclesiastical vestments and vessels - copes, mitres encrusted with silver gilt decoration, silver-headed crosiers and chalices; plate, jewels and relics – including a piece of the True Cross. Another highly prized material was the abbey’s lead, and this was stripped from the roof, pipes and elsewhere, and melted down to form ingots, or ‘pigs’, which were easier to transport. Each pig weighed nine hundredweights.

Fountains Abbey survived for a time intact because Henry VIII thought about locating a new diocese there so that the bishop would use the buildings and the abbey church would become the cathedral. He changed his mind, however, and settled the new bishop at Chester.

Today, Fountains Abbey is a property of The National Trust and a major tourist destination.
Posted by Stephanie A. Mann at 2:18 AM