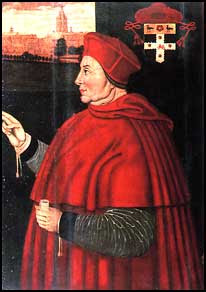 Henry VIII dismissed his Chancellor, Thomas Cardinal Wolsey, Archbishop of York on October 25, 1529. Henry held Wolsey responsible for the failure of the papal legatine court to dissolve his marriage to Katherine of Aragon, allowing him to marry Anne Boleyn. Also, Wolsey's diplomatic efforts had failed when France and the Holy Roman Empire made peace--Henry and Wolsey had attempted to play them off against each other so that England would have greater power on the Continent.

Wolsey offered and/or Henry took many of the Archbishop's great homes and lands. Henry had particularly coveted Hampton Court. As a Renaissance Prince of the Church, Wolsey had lived very well, especially in view of his middle-class birth.

Henry briefly forgave Wolsey, but finally had him brought from York to London to stand trial for high treason; Anne Boleyn's influence is often cited here. Wolsey died on the way (at a monastery!) on November 29, 1530 and Shakespeare adapted his last words:

Had I but served my God with half the zeal
I served my King, he would not in mine age
Have left me naked to mine enemies. (Henry VIII) 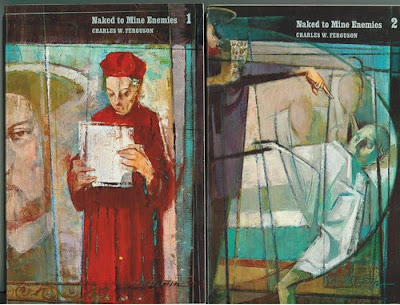 Shakespeare has Wolsey make this speech as he leaves Court in disgrace. Wolsey had many enemies among the nobility, not least because he had risen so high from lower birth. Wolsey had never been enthusiastic about Henry VIII's efforts to annul his marriage to Katherine of Aragon; at the end Anne Boleyn was such an enemy that he really hoped for their failure.

The most recent biography of Thomas Cardinal Wolsey places him in an international context: Cardinal Wolsey: A Life in Renaissance Europe by Stella Fletcher, published in 2009 by Continuum. One of the most available lives of Wolsey is Charles W. Ferguson's Naked to Mine Enemies, because it was part of the Time Reading Program and is still readily available in used bookstores (hopefully with both volumes together!)