Eleanor of Castile and the Eleanor Crosses 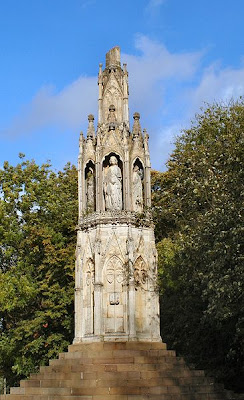 When Edward I's consort Eleanor of Castile died on November 28, 1290, the royal couple were travelling near Lincoln. After her body was transported from Lincoln to Westminster, Edward I had crosses set up along the stages of that journey. Twelve crosses marked the twelve stops--at Lincoln, Grantham, Stamford, Geddington, Northampton, Stony Stratford, Woburn, Dunstable, St. Albans, Waltham, Westcheap, and Charing. This site provides a great deal of detail, including a map and several images, of the Eleanor Crosses.

Some of the Eleanor Crosses were destroyed during the English Civil War by Parliamentary troops, and the crosses that stand today are often nineteenth century reconstructions. The English Heritage organization offers this website on the Geddington cross. The image of the Northamption cross is sourced here.
Posted by Stephanie A. Mann at 2:15 AM