The Dissolution of the Monasteries Redux 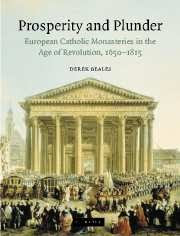 I commented yesterday to Brian Patrick on the Son Rise Morning Show that Henry VIII's "Achievement" of the Dissolution of the Monasteries in England--and in the parts of Ireland he controlled--was not a unique event in European history. Derek Beales' book on the effects of the Enlightenment anti-clericalism and the Revolutionary movements in a long view of the seventeenth century proves that:

In the Catholic countries of seventeenth- and early eighteenth-century Europe, communities of monks and nuns were growing in number and wealth. They constructed vast buildings, dominated education, and played a large part in the practice and patronage of learning, music, and the arts. This lavishly-illustrated book offers a unique, comparative description of these communities--their wealth, growth, life, and importance--and then explains their catastrophic decline and fall between 1650 and 1815 by reforming rulers, the 'Enlightenment', and the French Revolution. Derek Beales, Professor Emeritus of Modern History, Cambridge, is a Fellow of both the Royal Historical Society and the British Academy. He has published numerous historical monographs including a book on musical history entitled, Mozart and the Habsburgs (Reeding, 1993) as well as articles in the New York Review of Books and the Times Literary Supplement.

I have not read this book, but it looks very interesting:

After the defeat of liberalism in the Revolution of 1848, and in the face of the dramatic revival of popular Catholicism, German middle-class liberals used anti-Catholicism to orient themselves culturally in a new age. Michael B. Gross's study shows how anti-Catholicism and specifically the Kulturkampf—the campaign to break the power of the Catholic Church—were not simply attacks against the church, nor were they merely an attempt to secure state autonomy. Instead, Gross shows that the liberal attack on Catholicism was actually a complex attempt to preserve moral, social, political, and sexual order during a period of dramatic pressures for change.

By offering a provocative reinterpretation of liberalism and its relationship to the German anti-Catholic movement, this work ultimately demonstrates that in Germany, liberalism itself contributed to a culture of intolerance that would prove to be a serious liability in the twentieth century. It will be of particular interest to students and scholars of culture, ideology, religion, and politics.

Michael B. Gross is Associate Professor of History at East Carolina University.

And finally, Owen Chadwick's A History of the Popes, 1830-1914 is an absolutely great resource for understanding the kulturkampf movements not only in Germany but in Switzerland and France, and the general anti-clerical movements in Spain and Portugal. Chadwick ranges far beyond just the popes, covering the religious orders, saints canonized in that era, and other fascinating themes.
Posted by Stephanie A. Mann at 2:15 AM