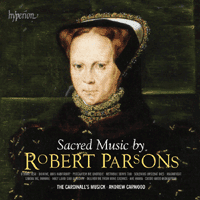 I have been listening to this new CD of Tudor church music by the composer Robert Parsons. Andrew Carwood includes these interesting details about the last track on the disc, an Ave Maria:

Ave Maria has become Parsons’ most famous and well-loved motet since it was included in the Oxford Book of Tudor Anthems in 1978. Settings of the Ave Maria are not frequent in England—even William Byrd only set them as required by the liturgy in his two books of Gradualia (1605 and 1607) rather than as stand-alone pieces. Parsons simply sets the lines found in the Gospel of St Luke and has no invocation for the dead (authorized by Pope Pius V in 1568). This is a magical setting and it is not surprising that there is a beautiful ‘Amen’ coda. Initially the piece gives the impression of using a cantus firmus in the top part but it is in fact free-composed throughout. Parsons starts each medius phrase one note higher than the previous one, beginning on F and then moving up to D with long slow notes before reaching ‘benedicta tu’ when it joins the other voices in equal importance. Paul Doe has suggested that this piece might have been prompted by the early promise or subsequent plight of Mary, Queen of Scots. There is no direct evidence for this but it is not unreasonable to consider Parsons and indeed most of the mid-sixteenth-century writers—Sheppard, Tallis, White, Mundy and Tye—as Catholic sympathizers. They seem more free, more expressive, more expansive and more brave in their Latin compositions and it is tempting to speculate that in setting words from Psalms 15 and 119, the Lamentations and the Funeral Responds, they were consciously producing music with a Catholic slant. In comparison their English works tend to be shorter and less virtuosic and even the fledgling Great Services are short on excellent material, but then these mid-sixteenth-century composers were creating a new genre not previously explored and were probably writing to fulfil a set of rules which were not entirely clear. England had to wait for another generation—headed by William Byrd, Thomas Weelkes and Thomas Morley—before writing in English could achieve greatness.

Robert Parsons became a Gentleman of the Chapel Royal in 1563 and died in 1572, of drowning.

The recording was made in the Fitzalan Chapel of Arundell Castle in 2010. You can listen to extracts and read the liner notes here. Note how often Andrew Carwood highlights the religious changes of the Tudor succession while discussing the Parson's compositions and their dates.
Posted by Stephanie A. Mann at 2:11 AM