The End of Catholic Revival in England, 1558 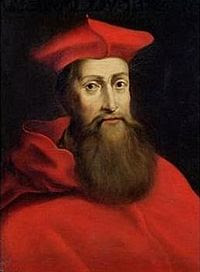 Mary, Queen of England and Ireland and her Archbishop of Canterbury, Reginald Cardinal Pole, both died on November 17, 1558. The fact that both of them died that day meant that their efforts to revive Catholicism in England would end with Mary's reign.

Mary's half-sister Elizabeth succeeded to the throne and was able to appoint a new Archbishop of Canterbury. That appointment did not occur without opposition, however. One definite achievement of Archbishop Pole was his turnaround of the English episcopacy--whereas only one bishop (martyr St. John Fisher) opposed Henry VIII's religious revolution--all but one bishop--and he was an elderly man--opposed Elizabeth's. It was also difficult to find two bishops who would consecrate Elizabeth's selection to succeed Pole, Matthew Parker, formerly chaplain to her mother, Anne Boleyn.

IF Reginald Pole had lived and remained Archbishop of Canterbury in Elizabeth's reign, he probably would have ended up removed from office and under house arrest or in exile for not swearing her new oaths of Supremacy and Uniformity. But it's an interesting alternative history view--what could have happened if he had survived the end of Mary's reign? Would his reforming spirit and positive catechetical approach: preparing an English Bible, a catechism, books of sermons, etc have had influence on Convocation and Parliament?

Nicholas Heath, Archbishop of York, and other Catholic Bishops were there to oppose Elizabeth I's religious settlement in Parliament. Heath remonstrated with her to defend the Catholic Church, but she rejected his counsels. He was imprisoned briefly, but ended up living under comfortable house arrest in Surrey, dying in 1578. Like Cuthbert Tunstall, Bishop of Durham (see post tomorrow), he had repented of accepting the royal supremacy over the Church under Henry VIII and opposed it during the reign of Edward VI (particulary because of the new ordinal)--and was deprived of his bishopric. Restored when Mary I came to the throne, he continued to serve Elizabeth I until her religious settlement led to his deprivation, imprisonment, and exile.
Posted by Stephanie A. Mann at 2:05 AM

Email ThisBlogThis!Share to TwitterShare to FacebookShare to Pinterest
Labels: Catholic Revival, Elizabeth I, Mary I, Reginald Pole, the Catholic Reformation