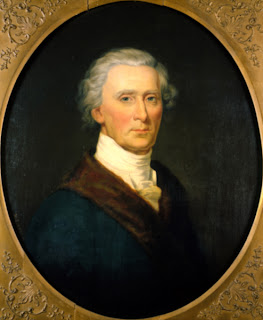 Charles Carroll of Carrollton, last surviving signer of the Declaration of the Independence, died on November 14, 1832. Just in time for the anniversary of his death, the Catholic bishops of Maryland issued a statement on protecting religious liberty. EWTN's National Catholic Register provides some context:

BALTIMORE (CNA)—Religious freedom is fundamental to a free society, but some political and cultural trends are threatening that freedom, the Catholic bishops of Maryland said in a new statement.

“Efforts to restrict the rights of individuals and institutions because of their religious or moral beliefs are on the rise here in Maryland and around the nation,” the bishops wrote.

“Religious liberty — a right rooted in our human dignity and protected by the First Amendment to the U.S. Constitution — is being silently and subtly eroded.”

The 12-page document, titled “The Most Sacred of All Property: Religious Freedom and the People of Maryland,” was signed by Cardinal Donald Wuerl, archbishop of Washington; Archbishop Edwin O’Brien, the apostolic administrator of Baltimore; and Bishop W. Francis Malooly of Wilmington, Del.

The document took its title from American Founding Father James Madison, who called conscience “the most sacred of all property” and its exercise “a natural and unalienable right.”

The Acton Institute reminds us of all that Charles Carroll risked and all he hoped to gain when he signed the Declaration of Independence:

When the signatories of the Declaration of Independence pledged their “lives, fortunes, and sacred honor,” few men had more to lose than Charles Carroll of Carrollton. A wealthy landowner, businessman, and member of a prominent Maryland family, Carroll risked the confiscation of his estate and the loss of his life if the British had prevailed. Yet when asked if he would sign or not, he replied, “Most willingly,“ and ratified what he called ”this record of glory.” Reflecting on that act fifty years later, Carroll–by then the last surviving signer–concluded that the civil and religious liberties secured by the Declaration and enjoyed by that present generation were “the best earthly inheritance their ancestors could bequeath to them.”

As a Roman Catholic–the only one to sign the Declaration–Carroll also had much to gain. Though many American colonists harbored intense suspicion toward Catholics (it was widely believed that Catholic doctrine was incompatible with republicanism), Carroll and his contemporary co-religionists presciently perceived that the American understanding of liberty entailed not only political and economic freedom but religious freedom as well.

It's too bad the writers of the Maryland bishops' statement did not reference Charles Carroll and the Carroll Family in the document!
Posted by Stephanie A. Mann at 2:15 AM