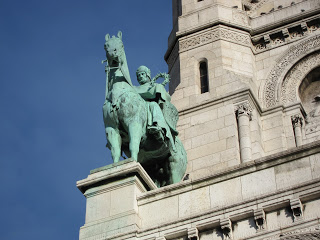 Today, August 25, would be the memorial of St. Louis, King of France if it were not a Sunday. He is one of the patron saints of France and his equestrian statue stands across from St. Joan of Arc on the facade of Sacre Coeur in Paris. St. Louis is also on the sanctoral calendar of the Episcopalian Church here in the USA:

(Apr. 25, 1214-Aug. 25, 1270). The patron saint for the Third Order of St. Francis. Born in Poissy, Louis IX became King of France on Nov. 29, 1226, and ruled until his death. He lived an austere and prayerful life, and embodied the highest ideals of medieval kingship. He sought to live a Franciscan life of poverty and self-denial in the midst of royal splendor. Louis built the Sainte-Chapelle in Paris as a reliquary for the Crown of Thorns which he acquired in 1239. He participated in crusades in 1248 and 1270. Louis endowed a number of religious houses and supported the theological college founded by Robert de Sorbon in 1257. While on crusade in 1270 he urged the Greek ambassadors to seek reunion with the Church of Rome. He was canonized by Pope Boniface VIII in 1297. Louis died in Tunis while on crusade. He is commemorated in the Episcopal calendar of the church year on Aug. 25.

St. Louis may be the patron saint for the Third Order of St. Francis, but he had contacts with Dominicans too. In particular, St. Thomas Aquinas. In his book about St. Thomas Aquinas, The Dumb Ox, Chesterton describes the famous encounter between the monarch and the friar: 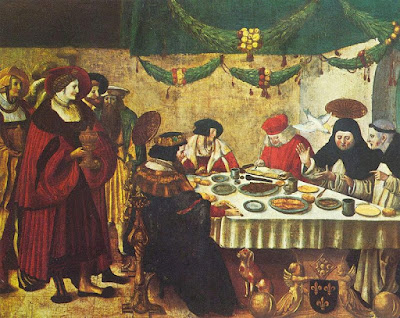 It is a real case against conventional hagiography that it sometimes tends to make all saints seem to be the same. Whereas in fact no men are more different than saints; not even murderers. And there could hardly be a more complete contrast, given the essentials of holiness, than between St. Thomas and St. Louis. St. Louis was born a knight and a king; but he was one of those men in whom a certain simplicity, combined with courage and activity, makes it natural, and in a sense easy, to fulfil directly and promptly any duty or office, however official. He was a man in whom holiness and healthiness had no quarrel; and their issue was in action. He did not go in for thinking much, in the sense of theorising much. But, even in theory, he had that sort of presence of mind, which belongs to the rare and really practical man when he has to think. He never said the wrong thing; and he was orthodox by instinct. In the old pagan proverb about kings being philosophers or philosophers kings, there was a certain miscalculation, connected with a mystery that only Christianity could reveal. For while it is possible for a king to wish much to be a saint, it is not possible for a saint to wish very much to be a king. A good man will hardly be always dreaming of being a great monarch; but, such is the liberality of the Church, that she cannot forbid even a great monarch to dream of being a good man. But Louis was a straight-forward soldierly sort of person who did not particularly mind being a king, any more than he would have minded being a captain or a sergeant or any other rank in his army. Now a man like St. Thomas would definitely dislike being a king, or being entangled with the pomp and politics of kings; not only his humility, but a sort of subconscious fastidiousness and fine dislike of futility, often found in leisurely and learned men with large minds, would really have prevented him making contact with the complexity of court life. Also, he was anxious all his life to keep out of politics; and there was no political symbol more striking, or in a sense more challenging, at that moment, than the power of the King in Paris. . . .

Somehow they steered that reluctant bulk of reflection to a seat in the royal banquet hall; and all that we know of Thomas tells us that he was perfectly courteous to those who spoke to him, but spoke little, and was soon forgotten in the most brilliant and noisy clatter in the world: the noise of French talking. What the Frenchmen were talking about we do not know; but they forgot all about the large fat Italian in their midst, and it seems only too possible that he forgot all about them. Sudden silences will occur even in French conversation; and in one of these the interruption came. There had long been no word or motion in that huge heap of black and white weeds, like motley in mourning, which marked him as a mendicant friar out of the streets, and contrasted with all the colours and patterns and quarterings of that first and freshest dawn of chivalry and heraldry. The triangular shields and pennons and pointed spears, the triangular swords of the Crusade, the pointed windows and the conical hoods, repeated everywhere that fresh French medieval spirit that did, in every sense, come to the point. But the colours of the coats were gay and varied, with little to rebuke their richness; for St. Louis, who had himself a special quality of coming to the point, had said to his courtiers, "Vanity should be avoided; but every man should dress well, in the manner of his rank, that his wife may the more easily love him."

And then suddenly the goblets leapt and rattled on the board and the great table shook, for the friar had brought down his huge fist like a club of stone, with a crash that startled everyone like an explosion; and had cried out in a strong voice, but like a man in the grip of a dream, "And that will settle the Manichees!"

The palace of a king, even when it is the palace of a saint, has it conventions. A shock thrilled through the court, and every one felt as if the fat friar from Italy had thrown a plate at King Louis, or knocked his crown sideways. They all looked timidly at the terrible seat, that was for a thousand years the throne of the Capets: and many there were presumably prepared to pitch the big black-robed beggarman out of the window. But St. Louis, simple as he seemed, was no mere medieval fountain of honour or even fountain of mercy but also the fountain of two eternal rivers: the irony and the courtesy of France. And he turned to his secretaries, asking them in a low voice to take their tablets round to the sear of the absent-minded controversialist, and take a note of the argument that had just occurred to him; because it must be a very good one and he might forget it. . . .

In the painting above by Niklaus Manuel, the two saints sit across the table from one another. There are two dark discs above their heads, which represent halos. Notice too the dog sitting under the table next to St. Louis's feet, while a dove (the Holy Spirit) inspires St. Thomas Aquinas!