"The Great Holocaust of the [Popish] Plot"

The summer of 1679 in England was a tense and dangerous one for Catholics; nevertheless, they survived and were even strengthened by what John Kenyon calls "the great holocaust of the [Popish] plot". At the beginning his book, which I think is still the standard text for comprehending the social, religious, and legal aspects of the Popish Plot, Kenyon declares that he will not use the titles Venerable, Blessed, or Saint when referring to the victims of that period of anti-Catholic hysteria. Nevertheless, he pays tribute to these martyrs in a way:

Between 20 June and 27 August 1679 . . . fourteen Catholics were executed; one layman, two Franciscans, four seminary priests, and seven Jesuits. . . . To the Catholics, it must have seemed that the reign of terror would henceforward mount in intensity, engulfing at least those priests still in prison . . .

But the whole process was self-defeating [for the Whigs]. . . . there is some evidence that the steady denials of those convicted were beginning to take effect. . . .

In the provinces, where the victims were notable local figures, and were being executed not for specific treason but merely for being in orders, feelings were even stronger. . . . The deaths of men like Francis Wall [St. John Wall], John Kemble and David Lewis did no one any good except the Catholic community, which was strengthened by their sacrifice. . . .

The sheriff of Monmouth (James Herbert of Coldbrook) postponed David Lewis's execution as long as he could, then stayed away from it . . . (pp. 205-206) 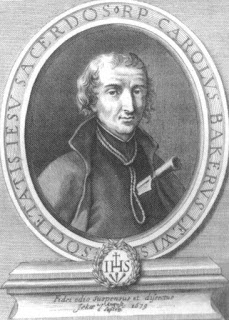 Saint David Lewis, SJ, was executed on August 27, 1679. at Usk in Monmouthshire. He was able to give a long last speech and the large crowd that witnessed his execution--predominantly Protestant--made sure that he was dead before he was eviscerated.

His feast is celebrated in Wales on August 26 since today is the feast of St. Monica of Hippo, St. Augustine of Hippo's mother.

James Herbert of Coldbrook, according to the History of Parliament, suffered some backlash because of that delay in executing Saint Davis Lewis: "on 18 Nov. 1680 [he] was reprimanded by the House of Lords for his lack of zeal in prosecuting Papists, though with the qualification that his loyalty and protestantism [sic] were not impugned."

St. David Lewis is one of the 40 Martyrs of England and Wales, canonized in 1970 by Pope Paul VI.