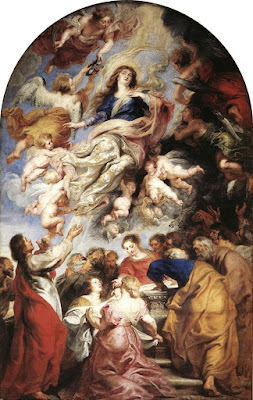 The University of Dayton has some excellent background on the Tradition and the Doctrine that the Blessed Virgin Mary was Assumed Body and Soul into Heaven:

Belief that Mary has been taken up and is now in heaven with both her body and her soul has been part of the teaching of the Catholic Church since the earliest centuries of Christianity. The strongest evidence for the belief of the early Christians is found in ancient liturgies and in homilies in honor of Mary's passing. A second source, widely spread in the Middle Ages is known as the Transitus writings. Today, the renewed discussion about the location of the tomb of Mary indicates interest about Mary's Assumption into heaven.

By the end of the Middle Ages, belief in Mary's Assumption into heaven was well established theologically and part of the devotional expressions of the people. The word Assumption comes from the Latin verb assumere, meaning "to take to oneself." Our Lord, Jesus Christ took Mary home to himself where he is.

For Martin Luther, Mary's Assumption was an understood fact, as his homily of 1522 indicates, in spite of the fact that Mary's Assumption is not expressly reported in Sacred Scripture. For Protestant reformer, Martin Butzer (1545), there was no reason to doubt about the Assumption of the Virgin into heavenly glory. "Indeed, no Christian doubts that the most worthy Mother of the Lord lives with her beloved Son in heavenly joy." (Marienlexikon, vol 3, 200)

H. Bullinger (1590), also a Protestant reformer, sought for a theological foundation for the Assumption in Scripture. He showed that the Old Testament tells of Elias, taken to heaven bodily to teach us about our immortality, and – because of our immortal soul – to respectfully honor the bodies of the saints. Against this backdrop he states, "Because of this, we believe that the pure immaculate chamber of the God-bearer, the Virgin Mary, is a temple of the Holy Spirit, that is her holy body, borne by angels into heaven." (Marienlexikon, vol 3, 200)

In the light of a long history of Christian belief since patristic times, in 1950, Pope Pius XII defined Mary's Assumption into Heaven as a dogma of Roman Catholicism:

"the Immaculate Mother of God, the ever Virgin Mary, having completed the course of her earthly life, was assumed body and soul into heaven."

The proclamation of this dogma is found in the encyclical (sic): Munificentissimus Deus. 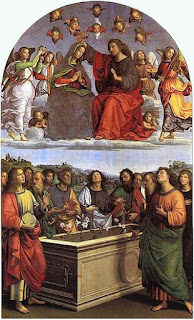 In Munificentissimus Deus, which is actually not an encyclical but an Apostolic Constitution, a more authoritative papal document, Pope Pius XII pointed out that the Assumption of the Blessed Virgin Mary had been celebrated in art, music, and liturgy for centuries.

Blessed John Henry Newman at the Oratory of St. Philip Neri in Birmingham preached on the Assumption of the Blessed Virgin Mary just about one hundred years before Pope Pius XII proclaimed the doctrine:

It was surely fitting then, it was becoming, that she should be taken up into heaven and not lie in the grave till Christ's second coming, who had passed a life of sanctity and of miracle such as hers. All the works of God are in a beautiful harmony; they are carried on to the end as they begin. This is the difficulty which men of the world find in believing miracles at all; they think these break the order and consistency of God's visible word, not knowing that they do but subserve a higher order of things, and introduce a supernatural perfection. But at least, my brethren, when one miracle is wrought, it may be expected to draw others after it for the completion of what is begun. Miracles must be wrought for some great end; and if the course of things fell back again into a natural order before its termination, how could we but feel a disappointment? and if we were told that this certainly was to be, how could we but judge the information improbable and difficult to believe? Now this applies to the history of our Lady. I say, it would be a greater miracle if, her life being what it was, her death was like that of other men, than if it were such as to correspond to her life. Who can conceive, my brethren, that God should so repay the debt, which He condescended to owe to His Mother, for the elements of His human body, as to allow the flesh and blood from which it was taken to moulder in the grave? Do the sons of men thus deal with their mothers? do they not nourish and sustain them in their feebleness, and keep them in life while they are able? Or who can conceive that that virginal frame, which never sinned, was to undergo the death of a sinner? Why should she share the curse of Adam, who had no share in his fall? "Dust thou art, and into dust thou shalt return," was the sentence upon sin; she then, who was not a sinner, fitly never saw corruption. She died, then, as we hold, because even our Lord and Saviour died; she died, as she suffered, because she was in this world, because she was in a state of things in which suffering and death are the rule. She lived under their external sway; and, as she obeyed Caesar by coming for enrolment to Bethlehem, so did she, when God willed it, yield to the tyranny of death, and was dissolved into soul and body, as well as others. But though she died as well as others, she died not as others die; for, through the merits of her Son, by whom she was what she was, by the grace of Christ which in her had anticipated sin, which had filled her with light, which had purified her flesh from all defilement, she was also saved from disease and malady, and all that weakens and decays the bodily frame. Original sin had not been found in her, by the wear of her senses, and the waste of her frame, and the decrepitude of years, propagating death. She died, but her death was a mere fact, not an effect; and, when it was over, it ceased to be. She died that she might live, she died as a matter of form or (as I may call it) an observance, in order to fulfil, what is called, the debt of nature,—not primarily for herself or because of sin, but to submit herself to her condition, to glorify God, to do what her Son did; not however as her Son and Saviour, with any suffering for any special end; not with a martyr's death, for her martyrdom had been in living; not as an atonement, for man could not make it, and One had made it, and made it for all; but in order to finish her course, and to receive her crown.

And therefore she died in private. It became Him, who died for the world, to die in the world's sight; it became the Great Sacrifice to be lifted up on high, as a light that could not be hid. But she, the lily of Eden, who had always dwelt out of the sight of man, fittingly did she die in the garden's shade, and amid the sweet flowers in which she had lived. Her departure made no noise in the world. The Church went about her common duties, preaching, converting, suffering; there were persecutions, there was fleeing from place to place, there were martyrs, there were triumphs; at length the rumour spread abroad that the Mother of God was no longer upon earth. Pilgrims went to and fro; they sought for her relics, but they found them not; did she die at Ephesus? or did she die at Jerusalem? reports varied; but her tomb could not be pointed out, or if it was found, it was open; and instead of her pure and fragrant body, there was a growth of lilies from the earth which she had touched. So inquirers went home marvelling, and waiting for further light. And then it was said, how that when her dissolution was at hand, and her soul was to pass in triumph before the judgment-seat of her Son, the apostles were suddenly gathered together in the place, even in the Holy City, to bear part in the joyful ceremonial; how that they buried her with fitting rites; how that the third day, when they came to the tomb, they found it empty, and angelic choirs with their glad voices were heard singing day and night the glories of their risen Queen. But, however we feel towards the details of this history (nor is there anything in it which will be unwelcome or difficult to piety), so much cannot be doubted, from the consent of the whole Catholic world and the revelations made to holy souls, that, as is befitting, she is, soul and body, with her Son and God in heaven, and that we are enabled to celebrate, not only her death, but her Assumption.
Posted by Stephanie A. Mann at 12:30 AM