Saint Cajetan and the Sack of Rome 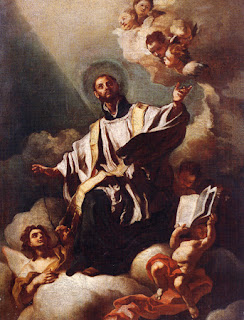 Today is the feast of Saint Cajetan, a saint of the Catholic Reformation and the co-founder of the Theatines. He was in Rome when the Holy Roman Emperor Charles V's troops sacked the city. As Father Alban Butler explains:

The army of the Emperor Charles V., which was commanded by the constable Bourbon, who had deserted from the French king to the emperor, marched from the Milanese to Rome, and took that city by assault on the 6th of May, 1527. This Duke of Bourbon, after having committed horrible outrages, was killed by a musket shot in mounting the wall; but Philibert of Challons, prince of Orange, took upon him the command of the army, which was composed in a great measure of Lutherans, and other enemies of the see of Rome. The pope and cardinals retired into the castle of St. Angelo; but the German army plundered the city, and were guilty of greater cruelties and excesses than had been committed by the Goths a thousand years before. The house of the Theatins (sic) was rifled, and almost demolished; and a soldier, who had known St. Cajetan at Vicenza before he renounced the world, falsely imagining he was then rich, gave an information to his officer against him to that effect; whereupon he was barbarously scourged and tortured to extort from him a treasure which he had not. Being at length discharged, though in a weak and maimed condition, he and his companions left Rome, with nothing but their breviaries under their arms, and with clothes barely to cover themselves. They repaired to Venice, where they were kindly received, and settled in the convent of St. Nicholas of Tolentino.

Saint Cajetan and the Theatines were dedicated to renewal and reform in the Catholic Church after the divisions of the Protestant Reformation, according to this biography from ETWN:

When his dream was about to be forged of bringing to ecclesial reform the figure of the cleric regular, knowing the important role of the priest, he wrote to his family: “For some time Christ has been calling me and inviting me, because of his kindness, to take part in his kingdom. And he makes me see more clearly every day that we cannot serve two masters, the world and Christ. I see Christ poor, and myself rich, He is mocked and I am a guest of honor, He is suffering, and I am delighting. I am dying to take a step towards meeting Him.” An insistent prayer arose from the depth of his being: that God would grant him the grace of finding three or four persons prepared to live the Gospel’s radicalism to introduce the reform the Church needed at that time. And he received the answer in the persons of Caraffa (later Pope Paul IV), Boniface of Colle and Paul Consiglieri. They were the first members of his foundation born with the evangelical spirit: “seek first of all the Kingdom of God and His justice, and all the rest will be given to you in great measure.” Approved by Clement VII in 1524, it had in Caraffa its first superior general.

After what he had endured in Rome during its Sack, he became superior general of the Theatines:

They were sent to Venice. In 1530 Cajetan was elected superior general, until three year later when Caraffa was again his superior and sent him to Verona, where he suffered the opposition of a great part of the clergy and the faithful. From there he went to Naples in 1533 and founded another House. His charity, fervor and apostolic ardor, sealed by his devotion to Mary worked countless conversions. He founded the Hills of Piety to help the poor, created hospices and opened hospitals. He was given the grace of working miracles. He died at Naples on August 7, 1547 and that same day the war ceased, which had been unleashed in the city. Urban VIII beatified him on October 8, 1629. Clement X canonized him on April 12, 1671.

The Theatines' church in Rome was Sant'Andrea della Valle, in which Puccini set the first act of Tosca, including the Te Deum to celebrate the supposed victory of Napoleon at Marengo. Scarpia says "Tosca, mi fai dimenticare Iddio!..." ("Tosca, you make me forget God!") before kneeling and praising God--Saint Cajetan would not have been happy to hear that!

Thomas Goldwell, the Bishop of Asaph, became a Theatine while in exile from England. According to the Catholic Encyclopedia, he was:

the last survivor of the ancient hierarchy of England; b. probably at the family manor of Goldwell, in the parish of Great Chart, near Ashford, Kent, between 1501 and 1515; d. in Rome, 3 April, 1585. He was a member of a Kentish family of ancient lineage, long seated at Goldwell; and was educated at All Souls College, Oxford, where he graduated M. A. in 1531, and B. D. in 1534. While at Oxford he attained more eminence in mathematics, astronomy, and kindred sciences, than in divinity or the humanities, a point worth remembering in view of his future career. He stood out firmly against the innovations in religion brought about by Henry VIII. At an early date he became intimate with Reginald, afterwards Cardinal, Pole, a friendship which proved to be a long lasting one, and which had considerable influence on Goldwell's subsequent career. Soon after 1535, when the king had begun his drastic measures of ecclesiastical spoliation, Goldwell became Pole's chaplain and joined him in exile, being included in the same Act of Attainder "for casting off his duty to the King, and submitting to the Bishop of Rome". He reached Rome in 1538, and shortly afterwards he was appointed camerarius of the English Hospital of the Holy Trinity. In 1547 he became a novice in the Theatine House of St. Paul, at Naples. On the death of Paul III, Pole, now a cardinal, asked and obtained permission for Goldwell to accompany him to Rome, and thus he was present at the long conclave of 1549-50 in the capacity of Pole's personal attendant. After the election of Julius III, Goldwell returned to Naples, and made his profession as a Theatine.

Goldwell returned to England when Reginald Cardinal Pole was sent as Papal Legate. He was with Pole when he died and then left England again when Elizabeth I succeeded. Goldwell attended the last session of the Council of Trent.
Posted by Stephanie A. Mann at 12:30 AM