As promised, I'll be on the Son Rise Morning Show bright and early this morning at 6:50 a.m. Central Time/7:50 a.m. Eastern to talk about "Newman and Friendship" in our Santo Subito! Series. 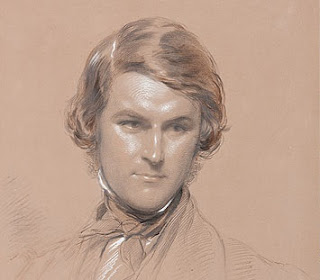 As an example of how much Blessed John Henry Newman valued friendship, read this homily preached at the funeral of his good friend, James Hope-Scott on May 5, 1873 in London. First, Newman describes his own grief in losing Hope-Scott:

I only know what he was to me. I only know what his loss is to me. I only know that he is one of those whose departure hence has made the heavens dark to me. But I have never lived with him, or travelled with him; I have seen him from time to time; I have visited him; I have corresponded with him; I have had mutual confidences with him. Our lines of duty have lain in very different directions. I have known him as a friend knows friend in the tumult and the hurry of life. I have known him well enough to know how much more there was to know in him; and to look forward, alas! in vain, to a time when, in the evening and towards the close of life, I might know him more. I have known him enough to love him very much, and to sorrow very much, that here I shall not see him again. But then I reflect, if I, who do not know him as he might be known, suffer as I do, what must be their suffering who knew him so well?

Newman then gives a history of their friendship:

I knew him first, I suppose, in 1837 or 1838, thirty-five or six years ago, a few years after he had become Fellow of Merton College. He expressed a wish to know me. How our friendship grew I cannot tell; I must soon have been intimate with him, from the recollection I have of letters which passed between us; and by 1841 I had recourse to him, as a sort of natural adviser, when I was in difficulty. From that time I ever had recourse to him, when I needed advice, down to his last illness. On my first intimacy with him he had not reached the age of thirty. I was many years older; yet he had that about him, even when a young man, which invited and inspired confidence. It was difficult to resist his very presence. True, indeed, I can fancy those who saw him but once and at a distance, surprised and perplexed by that lofty fastidiousness and keen wit which were natural to him; but such a misapprehension of him would vanish forthwith when they drew near to him, and had actual trial of him; especially, as I have said, when they had to consult him, and had experience of the simplicity, seriousness, and (I can use no other word) the sweetness of his manner, as he threw himself at once into their ideas and feelings, listened patiently to them, and spoke out the clear judgment which he formed of the matters which they had put before him.

Newman then describes how Hope-Scott always displayed leadership and sympathy among his friends:

This is the first and the broad view I am led to take of him. He was, emphatically, a friend in need. And this same considerateness and sympathy with which he met those who asked the benefit of his opinion in matters of importance was, I believe, his characteristic in many other ways in his intercourse with those towards whom he stood in various relations. He was always prompt, clear, decided, and disinterested. He entered into their pursuits, though dissimilar to his own; he took an interest in their objects; he adapted himself to their dispositions and tastes; he brought a strong and calm good sense to bear upon their present or their future; he aided and furthered them in their doings by his cooperation. Thus he drew men around him . . . 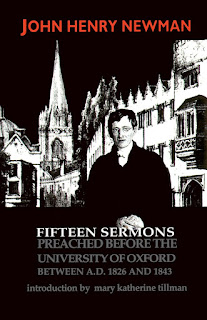 One of the reasons that Newman valued friendship is that he believed that personal influence was essential in spreading the Good News, in calling others to Jesus, and persuading, where logic and arguments could not, others to accept the Truth. As he said in one of his Oxford sermons, "Personal Influence, the Means of Propagating the Truth":

we shall find it difficult to estimate the moral power which a single individual, trained to practise what he teaches, may acquire in his own circle, in the course of years. While the Scriptures are thrown upon the world, as if the common property of any who choose to appropriate them, he is, in fact, the legitimate interpreter of them, and none other; the Inspired Word being but a dead letter (ordinarily considered), except as transmitted from one mind to another. While he is unknown to the world, yet, within the range of those who see him, he will become the object of feelings different in kind from those which mere intellectual excellence excites. The men commonly held in popular estimation are greatest at a distance; they become small as they are approached; but the attraction, exerted by unconscious holiness, is of an urgent and irresistible nature; it persuades the weak, the timid, the wavering, and the inquiring; it draws forth the affection and loyalty of all who are in a measure like-minded; and over the thoughtless or perverse multitude it exercises a sovereign compulsory sway, bidding them fear and keep silence, on the ground of its own right divine to rule them,—its hereditary claim on their obedience, though they understand not the principles or counsels of that spirit, which is "born, not of blood, nor of the will of the flesh, nor of the will of man, but of God." . . .

Will it be said, This is a fancy, which no experience confirms? First, no irreligious man can know any thing concerning the hidden saints. Next, no one, religious or not, can detect them without attentive study of them. But, after all, say they are few, such high Christians; and what follows? They are enough to carry on God's noiseless work. The Apostles were such men; others might be named, in their several generations, as successors to their holiness. These communicate their light to a number of lesser luminaries, by whom, in its turn, it is distributed through the world; the first sources of illumination being all the while unseen, even by the majority of sincere Christians,—unseen as is that Supreme Author of Light and Truth, from whom all good primarily proceeds. A few highly-endowed men will rescue the world for centuries to come. Before now even one man [St. Athanasius of Alexandria] has impressed an image on the Church, which, through God's mercy, shall not be effaced while time lasts. Such men, like the Prophet, are placed upon their watch-tower, and light their beacons on the heights. Each receives and transmits the sacred flame, trimming it in rivalry of his predecessor, and fully purposed to send it on as bright as it has reached him; and thus the self-same fire, once kindled on Moriah, though seeming at intervals to fail, has at length reached us in safety, and will in like manner, as we trust, be carried forward even to the end.

As Newman wrote in his meditation on "Jesus, the light of the soul":

Stay with me, and then I shall begin to shine as you shine: so to shine as to be a light to others. The light, O Jesus, will be all from you. None of it will be mine. No merit to me. It will be you who shines through me upon others. O let me thus praise you, in the way which you do love best, by shining on all those around me. Give light to them as well as to me; light them with me, through me. Teach me to show forth your praise, your truth, your will. Make me preach you without preaching-not by words, but by my example and by the catching force, the sympathetic influence, of what I do - by my visible resemblance to your saints, and the evident fullness of the love which my heart bears to you.
Posted by Stephanie A. Mann at 12:00 AM