On the Son Rise Morning Show: Newman and Literature, Part One 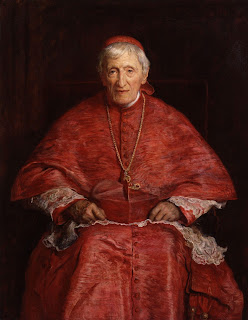 As promised, I'll be on the Son Rise Morning Show bright and early this morning (6:50 a.m. Central/ 7:50 a.m. Eastern) to talk with Anna Mitchell about Newman and Literature, focusing today on Newman's literary style.

Blessed John Newman was once told in a letter that someone thought he was a saint and he replied humbly:

I return you Miss Moore’s letter. You must undeceive her about me, though I suppose she uses words in a general sense. She called Newman a saint. I have nothing of a Saint about me as every one knows, and it is a severe (and salutary) mortification to be thought next door to one. I may have a high view of many things, but it is the consequence of education and of a peculiar cast of intellect—but this is very different from being what I admire. I have no tendency to be a saint—it is a sad thing to say. Saints are not literary men, they do not love the classics, they do not write Tales. I may be well enough in my way, but it is not the ‘high line.’ People ought to feel this, most people do. But those who are at a distance have fee-fa-fum notions about one. It is enough for me to black the saints’ shoes—if St. Philip uses blacking, in heaven. (LD XIII:419).

Some have used this to deprecate Newman's beatification and canonization saying it was somehow against his will--but isn't this what most of us would reply if someone said we were saints? He did not say that he didn't want to be a saint (be in Heaven), but that he did not want to be called a saint while he was still alive.

Nonetheless, Newman was a "literary" man who loved the classics and wrote Tales and who wanted to be a good writer, communicating truth and action to his audience, reaching them to persuade them, console them, excite them to good thoughts, good works, good ways of living.

1. A man should be in earnest–by which I mean he should write, not for the sake of writing, but to bring out his thoughts.

2. He should never aim to be eloquent.

3. He should keep his idea in view, and should write sentences over and over again till he has expressed his meaning accurately, forcibly, and in few words.

4. He should aim at being understood by his hearers or readers.

5. He should use words which are likely to be understood. Ornament and amplification will come spontaneously in due time, but he should never seek them.

6. He must creep before he can fly–by which I mean that humility, which is a great Christian virtue, has a place in literary composition.

7. He who is ambitious will never write well; but he who tries to say simply what he feels and thinks, what religion demands, what faith teaches, what the Gospel promises, will be eloquent without intending it, and will write better English than if he made a study of English literature.

Regarding rule number seven, Newman had also made a study of English literature, and he knew the power of all literature (tales, stories, novels, plays, poetry, etc). He had a high view of the power of Literature to move and influence people. In The Idea of the University he argues that if Theology is not part of a university curriculum, Literature could take its place (and so could Science). Literature, however, may be the greater danger to Theology because, if Science “ignores the idea of moral evil”, Literature recognizes and understands it too well, and can make it both attractive and sympathetic to the reader. Newman states that Literature is the voice of “the natural man”, fallen and sinful:

Literature stands related to Man as Science stands to Nature; it is his history. Man is composed of body and soul; he thinks and he acts; he has appetites, passions, affections, motives, designs; he has within him the lifelong struggle of duty with inclination; he has an intellect fertile and capacious; he is formed for society, and society multiplies and diversifies in endless combinations his personal characteristics, moral and intellectual. All this constitutes his life; of all this Literature is the expression; so that Literature is to man in some sort what autobiography is to the individual; it is his Life and Remains. Moreover, he is this sentient, intelligent, creative, and operative being, quite independent of any extraordinary aid from Heaven, or any definite religious belief; and as such, as he is in himself, does Literature represent him; it is the Life and Remains of the natural man, innocent or guilty. I do not mean to say that it is impossible in its very notion that Literature should be tinctured by a religious spirit; Hebrew Literature, as far as it can be called Literature, certainly is simply theological, and has a character imprinted on it which is above nature; but I am speaking of what is to be expected without any extraordinary dispensation; and I say that, in matter of fact, as Science is the reflection of Nature, so is Literature also—the one, of Nature physical, the other, of Nature moral and social. Circumstances, such as locality, period, language, seem to make little or no difference in the character of Literature, as such; on the whole, all Literatures are one; they are the voices of the natural man.

He counsels that the university should not censure or bowdlerize works of literature and shield students from them. He warns that you cannot “attempt a sinless Literature of sinful man”. The students at a university must read the classic works of literature if they are to be prepared for the world and to develop the philosophical method that he claimed was the purpose of university education.

Newman had studied the art of writing and noted in a lecture to the Philosophy department at the Catholic University of Ireland, as quoted by Father Juan Velez, that:

. . . writing is essentially a personal work, not something that results from production or a natural process. It is not a mere vehicle of things or symbols as is the case with mathematics. “Literature is the personal use or exercise of language.” And this is proved from the fact each author writes differently, and the genius masters language for his purpose: “while the many use language as they find it, the man of genius uses it indeed, but subjects it withal to his own purposes, and moulds it according to his own peculiarities. The throng and succession of ideas, thoughts, feelings, imaginations, aspirations, which pass within him, the abstractions, the juxtapositions, the comparisons, the discriminations, the conceptions, which are so original in him, his views of external things, his judgments upon life, manners, and history, the exercises of his wit, of his humour, of his depth, of his sagacity, all these innumerable and incessant creations, the very pulsation and throbbing of his intellect, does he image forth, to all does he give utterance, in a corresponding language, which is as multiform as this inward mental action itself and analogous to it, the faithful expression of his intense personality…” Language is as the very shadow of an author, it is unique, not someone else’s shadow.

He goes further: “Thought and speech are inseparable from each other. Matter and expression are parts of one: style is a thinking out into language. This is what I have been laying down, and this is literature; not things, not the verbal symbols of things; not on the other hand mere words; but thoughts expressed in language.” Men, unlike animals, exercise logos, the Greek word for both reason and speech. A classical author has both; he thinks and writes his thoughts. He is not like a traveler unable to write who engages a professional letter writer. Excellent writers such as Shakespeare or Walter Scott did not aim at diction for its own sake; instead they poured forth beautiful words because they had beautiful thoughts.

Newman definitely had beautiful thoughts, about Jesus, the Catholic Church, the Blessed Virgin Mary, the Saints, education, the laity, faith and reason, etc. That's why getting used to his writing style, as Ciceronian and Victorian as it is, is worth doing.
Posted by Stephanie A. Mann at 12:30 AM