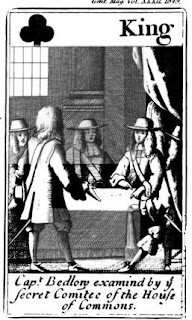 William Bedloe who assisted Titus Oates in perjury and false accusations against Jesuit priests and other Catholics in the Popish Plot during the reign of King Charles II died on August 20, 1680. His entry in the Dictionary of National Biography, written by Joseph Woodfall Ebsworth, denounces him as a "dishonest adventurer and 'evidence' in the Popish plot". Bedloe was complicit with the conviction of at least one innocent man, Blessed Edward Coleman or Colman.

His biographical entry describes his duplicity with dizzying detail:

He claimed for himself the attainment of proficiency in Latin, heraldry, and mathematics. David Lewis, the Jesuit, who was afterwards executed at Monmouth, took notice of the boy when he was twelve years old, and taught him much, with intent of converting him. When aged twenty, in 1670, he travelled to London with one hundred pounds in his pocket, and lived near two Jesuits, Father Harman and Father Johnson. They dined at Locket's ordinary, and were said to adjourn to Mother Cresswell's. Bedloe certainly lived a sharping life in London before he went to Dunkirk, where he was recommended by the lady abbess to Sir John Warner, who sent him to Father Harcourt, the Jesuit, afterwards executed on the evidence of Oates. By his own account, William Bedloe went to Rome, Flanders, Spain, &c., carrying letters; but opened them and made forged copies, which he delivered, retaining the originals. He bore an alias of Captain Williams, under which he cheated the Prince of Orange, and from him, by fraud, obtained a captain's commission. But this captaincy was as apocryphal as the 'invisible degree' of doctor won by Titus Oates at Salamanca. Five years of varied service, intrigues, frauds, and broils, prepared him, with occasional employment by the Jesuits, for emerging into notice as a betrayer and forsworn spy. He declared that Titus Oates had anticipated and outstripped him in making revelations of the popish plot. At the beginning of August 1678, he confessed that he 'had once been an ill man, but desired to be so no more.' He wrote from Bristol, offering to make startling declarations. The Earl of Danby gave little credit to him; and in revenge for this, Bedloe asserted that a bribe was offered to him by Danby, who promised that he should be supported in whatever country he chose to retire into, if he would suppress his threatened revelations. The commons accepted his account of the murder of Sir E. B. Godfrey, and gave him 500l. The extant portrait of Bedloe, prefixed to his 'Narrative' of the fire of London having been caused by the papists, shows a villainous countenance, harsh and forbidding, full of malice and revenge. With beetle brows, hard mouth, and savage eyes, we see the man, unscrupulous, unrelenting, as he in later life became. Dressed in finery beyond his station, his arrogance is as self-evident as his malice. He declared that Counsellor Reading had tried to tamper with him for suppression of his testimony, and Reading was condemned to a year's imprisonment, with exposure for an hour in the pillory, and to pay a fine of 1,000l. Bedloe made many accusations and found willing associates. The king's chemist, Dr. James, deposed that one Dr. Smith, a papist, tried to make him poison Bedloe with a pill on 20 March 1679. By this time he was almost as popular as Oates. He received ten pounds weekly allowance from the royal funds, and lived at the rate of two thousand a year. Rich dupes were plentiful. The citizens feasted him. His folio pamphlets, with copperplate portrait prefixed, had a large sale. He attributed the most extensive plots and execrable crimes, falsely, to the Romanists.

Bedloe went too far, however, and was facing distrust and waning influence when he died: 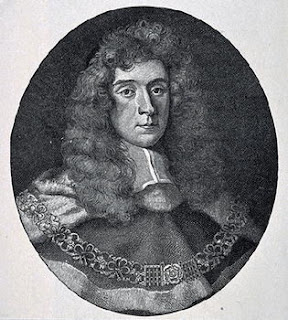 Then he was recalled to London in the middle of July 1680. He was now, with Oates, experiencing the fickleness of fortune and the waning of popularity. Sir George Jeffreys [left], on the bench, told him sharp truths, and he felt his power deserting him. He retreated back to Bristol, where he had left his wife Anna, who, in her illness, summoned him, at beginning of August. He fell ill after his hurried journey, having 'broken his gall' by violent riding. He was said to be past cure. At the commencement of the assizes on 16 Aug., Sir Francis North, chief justice of the common pleas, attended Bedloe, and took his dying deposition. There had been a promise of fresh revelations, but none of importance were forthcoming. He reiterated old statements as really true, his wife being beside him. James Bedloe [his brother] made immediate application for money from King Charles, through North, next day. This application, 'that his sickness was very changeable, and that money was required for his subsistence,' explains the persistence of the family in the accusation of the Jesuits. William's death took place on Friday, 20 Aug. 1680.

When Sir George Jeffreys, later of the Bloody Assizes (as featured in the Errol Flynn movie Captain Blood) turns against you, you're in trouble. Although Jeffreys would later serve James II as Lord Chancellor, he was no friend of Catholics and was certainly ready to find them guilty of treason--as was Sir William Scroggs, Lord Chief Justice at the time of the Popish Plot--and it was not until the end, nearly, of all the trials and executions, that these judges began to see the perjury of Oates, Bedloe, and others.

Although Ebsworth denounces Bedloe, he's no friend of Catholics either, using the terms Romanists and Papist, and Romanism (in his biography of Edward Coleman, Bedloe's chief victim).
Posted by Stephanie A. Mann at 12:30 AM