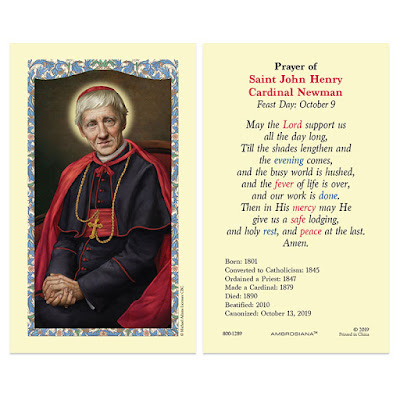 As promised, Matt Swaim and I will wrap up our Son Rise Morning Show Santo Subito series this morning at 7:50 a.m. Eastern/6:50 a.m. Central.

I celebrated the day by ordering holy cards, which happily for me feature the prayer I said so often while attending St. Paul's Parish-Newman Center at Wichita State University! I also attended a Solemn Mass in the evening at Newman University! Students there had been in a lock down Saturday night to watch the canonization live (3:00 a.m.!) after an period of Eucharistic Adoration under the stars. Ah, youth! 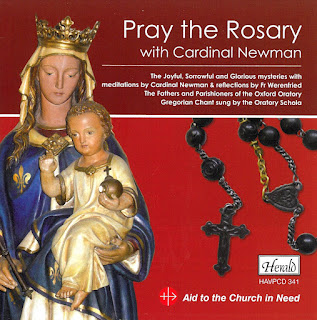 I prayed the Glorious Mysteries with St. John Henry Newman's meditations, the CD from Aid to the Church in Need UK package having arrived on Saturday! and listened to one of my late husband's favorite devotional CDs, Heart Speaks to Heart! 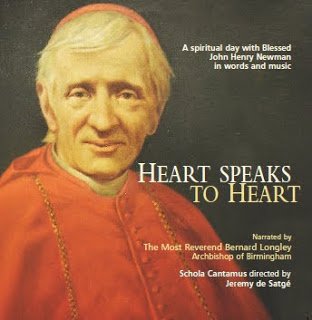 The BBC reports that thousands of Britons attended the ceremony (video from the Vatican)held in the square of St. Peter's Basilica and that tens of thousands of pilgrims were there. The booklet for the Mass and canonizations may be accessed here.

Pope Francis gave a homily on the Gospel (Luke 17:11-19, the story of the ten lepers) at Sunday's canonization Mass, mentioning the five new saints only at the end. Pope Francis's allusions to St. John Henry Newman were indirect in his homily, quoting one of his Parochial and Plain Sermons, a passage from the Meditations and Devotions, and a phrase from "The Pillar and the Cloud/Lead, Kindly Light"; he mentioned the three religious sisters briefly and highlighted St. Marguerite Bays most directly, though also briefly:

To cry out. To walk. To give thanks. Today we give thanks to the Lord for our new Saints. They walked by faith and now we invoke their intercession. Three of them we religious women; they show us that the consecrated life is a journey of love at the existential peripheries of the world. Saint Marguerite Bays, on the other hand, was a seamstress; she speaks to us of the power of simple prayer, enduring patience and silent self-giving. That is how the Lord made the splendour of Easter radiate in her life. Such is the holiness of daily life, which Saint John Henry Newman described in these words: “The Christian has a deep, silent, hidden peace, which the world sees not… The Christian is cheerful, easy, kind, gentle, courteous, candid, unassuming; has no pretence… with so little that is unusual or striking in his bearing, that he may easily be taken at first sight for an ordinary man” (Parochial and Plain Sermons, V,5).

Let us ask to be like that, “kindly lights” amid the encircling gloom. Jesus, “stay with me, and then I shall begin to shine as Thou shinest; so to shine as to be a light to others” (Meditations on Christian Doctrine, VII, 3). Amen.’

Before the canonization, Charles, the Prince of Wales, praised Newman, as excerpted in this CNA story:

The Prince of Wales said Saturday that the canonization of Cardinal John Henry Newman is a cause for celebration among all Britons, those who are Catholic and those who “cherish the values by which he was inspired.”

“His faith was truly catholic in that it embraced all aspects of life. It is in that same spirit that we, whether we are Catholics or not, can, in the tradition of the Christian Church throughout the ages, embrace the unique perspective, the particular wisdom and insight, brought to our universal experience by this one individual soul,” Prince Charles, heir to the British throne, wrote in an Oct. 12 column for L’Osservatore Romano (in Italian).

“Whatever our own beliefs, and no matter what our own tradition may be, we can only be grateful to Newman for the gifts, rooted in his Catholic faith, which he shared with wider society: his intense and moving spiritual autobiography and his deeply-felt poetry,” the prince wrote.

He even quoted The Dream of Gerontius!

That confidence was expressed in his love of the English landscape and of his native country’s culture, to which he made such a distinguished contribution. In the Oratory which he established in Birmingham, and which now houses a museum dedicated to his memory as well as an active worshipping community, we see the realisation in England of a vision he derived from Rome which he described as ‘the most wonderful place on Earth’. In bringing the Oratorian Congregation from Italy to England, Newman sought to share its charism of education and service.

He loved Oxford, gracing it not only with passionate and erudite sermons, but also with the beautiful Anglican church at Littlemore, created after a formative visit to Rome where, seeking guidance on his future spiritual path and pondering his relationship with the Church of England and with Catholicism, he wrote his beloved hymn, ‘Lead Kindly Light’. When he finally decided to leave the Church of England, his last sermon as he said farewell to Littlemore left the congregation in tears. It was entitled ‘The Parting of Friends.’

As we mark the life of this great Briton, this great churchman and, as we can now say, this great saint, who bridges the divisions between traditions, it is surely right that we give thanks for the friendship which, despite the parting, has not merely endured, but has strengthened.

Saint John Henry Newman, pray for us!
Posted by Stephanie A. Mann at 12:00 AM