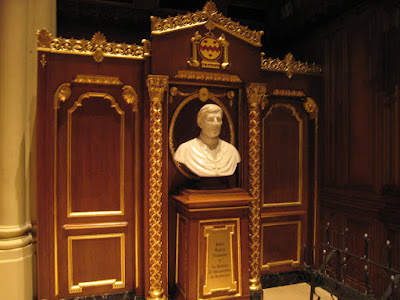 Father George Rutler, who presented at a Newman School of Catholic Thought at the Newman Center in 1995 (the 150th anniversary of Saint John Henry Newman's becoming a Catholic), wraps up my Octave of celebration on Newman's canonization with this message:

Last week’s canonization of Saint John Henry Newman will have universal influences that I trust will include our own parish. It should be remembered that his achievements, for the most part, hardly seemed successful at the time. He might even be called a patron saint of the disappointed.

Newman was so nervous in his university examinations that he got a “Lower Second Class” degree. He played the violin to relax, but the chords of his mind were taut, and he later suffered a nervous breakdown. He failed to attain a professorship of Moral Philosophy. Many Oxford dons derided his views, and eventually he resigned.

When Newman became a Catholic, former friends thought he had wasted his talents, and some Catholics questioned his free spirit and innovative genius. Not least among these were bishops. In Ireland, Archbishop Cullen impeded his foundation of a Catholic University there and opposed making Newman a bishop. In England, Cardinal Manning, a great man in some ways but not innocent of envy, regularly thwarted numerous projects. The English-language secretary of Pope Pius IX prejudiced the pope’s opinion of Newman, and with no little subtlety, Manning tried to prevent the new Pope Leo XIII from vindicating him with a Cardinal’s red hat.

Newman left a legacy of 32 volumes of letters, and in some of them he confided his frustrations. But his amiability and patience won over many. In old age, Newman’s Oxford college made him an honorary Fellow, and at Newman’s death Manning himself said, “The history of our land will hereafter record the name of John Henry Newman among the greatest of our people, as a confessor for the faith, a great teacher of men, a preacher of justice, of piety, and of compassion.”

Newman kept his balance by a steady faith in the uncompromising truth of Christ. This boldly defied the pastiche of true Christianity that was spreading in his time and which he prophesied would become endemic in our own age:

"What is the world's religion now? It has taken the brighter side of the gospel, its tidings of comfort, its precepts of love; all darker, deeper views of man's condition and prospects being comparatively forgotten. This is the religion natural to a civilized age and well has Satan dressed and completed it into an idol of the Truth. . . . Our manners are courteous; we avoid giving pain or offence . . . religion is pleasant and easy; benevolence is the chief virtue; intolerance, bigotry, excess of zeal are the first of sins. . . . [I]t includes no true fear of God, no fervent zeal for His honour, no deep hatred of sin, no horror at the sight of sinners, no indignation and compassion at the blasphemy of heretics, no jealous adherence to doctrinal truth . . .—and therefore is neither hot nor cold, but (in Scripture language) lukewarm.” (Sermon 24. Religion of the Day)

That sort of “Catholic-Lite” does not make saints, and Newman proved that.

In 2011, my late husband Mark and I visited the Church of Our Saviour in New York City, then under Father Rutler's care, and I took the picture of the first shrine to then Blessed John Henry Newman in the USA, created and installed with the typical Rutler style and finesse. Father Rutler has been pastor at the Church of Saint Michael the Archangel in Hell's Kitchen since 2013 and on the church's website you can see a photograph of the bust of St. John Henry Newman created by Christopher Alles:

The image of the newly canonized Saint John Henry Newman, which will be blessed at the 10 o'clock Mass on Sunday, October 13, is the work of our parishioner Christopher Alles, who also sculpted the angels atop the new baldacchino and has completed other artistic projects for the parish. He took inspiration from classic photos of John Henry Newman, along with reference to previous artists, to complete his portrait of this great Saint. The sculpture is deliberately designed to increase the sense of presence, with one hand holding a book and the figure paused in contemplation. The piece was cast in bronze by Independent Casting in Philadelphia. Mr. Alles is a New York-based artist who specializes in sacred art and architectural sculpture. We are grateful to friends of the parish who have so kindly and generously donated funds for the completion of this work, and to Christopher for his time and labor in providing this artistic and devotional addition to our church. He and his wife Emma are expecting their first child in December.

More views of the bust are available at the artist's website.