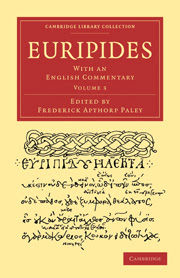 I posted yesterday the story of Father John Morris, SJ, a convert to Catholicism influenced by Newman and other Anglicans becoming Catholic. In that story there was a note about Frederick Apthorp Paley (F.A. Paley) having to leave Cambridge because it was supposed that he had influenced Morris--rather like the Pearson Integrated Humanities Program at the University of Kansas being disbanded because students became Catholic!

Here's Paley's notice in the Catholic Encyclopedia. I find the parts I've put in bold type rather poignant:

Classical scholar, born at Easingwold near York, 14 Jan., 1815; died at Bournemouth, 9 December, 1888, son of the Rev. Edmund Paley and grandson of William Paley who wrote "Evidences of Christianity". He was educated at Shrewsbury School and St. John's College, Cambridge, where he taught and continued to study for eight years after his B. A. degree (1838). His studies were mainly classical; but, despite an incapacity for mathematics, he was interested in mechanics and in natural science and was an enthusiastic ecclesiological antiquary. In 1846, being well known as a Cambridge sympathizer with the Oxford Movement, he was expelled from residence in St. John's College, on suspicion of having influenced one of his pupils to become a Catholic. He was himself received into the Church in this year. For the next fourteen years he supported himself as a private tutor in several Catholic families successively (Talbot, Throckmorton, Kenelm Digby) and by his pen. From 1860, when Tests began to be relaxed, he again lived at Cambridge until 1874; from 1874 to 1877 he was professor of classical literature at the abortive Catholic University College at Kensington. From 1877 till his death he continued to write assiduously. But the interruption of his university career, the want of a settled competence, and his banishment from the place, the society, and the learned facilities which might best have improved his talents and industry, had the effect of rendering nearly all his voluminous production ephemeral. His many classical editions which had a great and not undeserved vogue and influence in their day became soon obsolete and marked no decisive epoch in classical philology. Yet his work on Euripides and Aeschylus in particular may still be consulted with profit, at least as a monument of protest against the Victorian mock-archaic convention in translations from Greek poetry; and it is easy to underrate now the merits of work which met a great demand for school and college use, and itself did much to evoke the more scientific scholarship which has superseded it.

His works number more than fifty volumes, besides numerous magazine articles and reviews contributed to the "American Catholic Quarterly", "Edinburgh Review", "Journal of Philology" etc. The first of his classical publications, and the one which established his reputation as a scholar, was the text of Aeschylus (18447); during the next forty years he edited with the commentaries, Propertius (1853); Ovid's "Fasti" (1854); Aeschylus (1855); Euripides (1857); Hesiod (1861); Theocritus (1863); Homer's "Iliad" (1866); Martial (1868); Pindar (transl. with notes) 1868; Aristophanes' "Peace" (1873); Plato's "Philebus" (1883); "Private Orations of Demosthenes" (l874); Plato's " Thaetetus " (1875); Aristophanes' "Acharnians" (1876); Medicean Scholia of Aeschylus" (1878); Aristophanes' "Frogs " (1878); Sophocles (1880). To these must be added many critical inquiries, especially on the Homeric question, and most of his Commentaries ran through three or four editions, of which Marindin remarks that "every new edition was practically a new work". He found leisure to issue books on architecture; his "Manual of Gothic Mouldings", first published in 1845, went into a fifth edition in l891.

That was that writer's view in the early 20th century. I would hope that Paley, like Newman, would have rejoiced in his spiritual consolations of being part of the one, true fold of Christ. He may have been very happy with all his projects and his achievement in reading those great works, translating, editing, and publishing the results! Cambridge University Press still has his Euripides in print: perhaps Paley's work isn't as obsolete as his biographer supposed.
Posted by Stephanie A. Mann at 12:00 AM