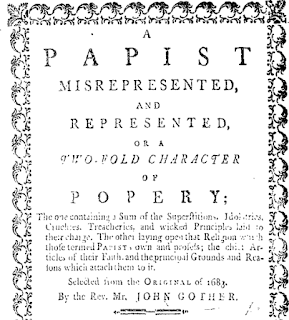 According to C. F. Wemyss Brown in the Catholic Encyclopedia, John Gother was a:

Priest and controversialist; b. at Southampton, date unknown; d. at sea on a voyage to Lisbon, 2 October, 1704 (O.S.). Educated a strict Presbyterian, he became a convert and entered the English College at Lisbon in 1668. He was ordained priest in 1682, and then returned to England to work on the mission in London. He was of a very retiring disposition, and soon began to devote the most of his time to controversial writings, which he began in 1685. His famous work, "A Papist Misrepresented and Represented", contains a long list of the vulgar errors regarding Catholic doctrine and practice together with his masterly refutations of them, and is as appropriate for use in controversy to-day [1909], as when it was written, with the solitary exception of his remarks about Papal infallibility, which need to be brought up to date. This work brought no less an antagonist than Stillingfleet into the lists, together with a host of the lesser lights of Anglican Divinity, and then there arose a prolonged series, without end, of Answers, Objections, Rejoinders, and Refutations, throughout which Gother single-handed more than maintained his position. His literary style was exceedingly pure, and was often a great factor in winning converts to the Church. His trenchant simplicity has often been compared to Swift at his best. Dryden once facetiously remarked that Gother was the only person, except himself, who knew how to write English. 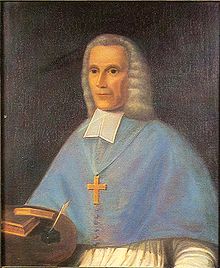 He was afterwards chaplain to George Holman of Warkworth Castle, Northamptonshire, where he received into the Church and instructed Richard Challoner, then a youth, the future celebrated Bishop and Vicar Apostolic of the London District. Shortly before his death, Gother was proposed as a possible successor to Bishop Ellis of the Western District. He died at sea on a voyage to Lisbon, having received the last rites from a priest who chanced to be on board. The master of the vessel was so impressed with Gother's sanctity, that he preserved the body and delivered it to the English College at Lisbon, where it was interred. His principal works are "A Papist Misrepresented and Represented, or a two-fold Character of Popery" (original ed., London, 1665; has passed through numerous editions down to the present day; a good summary is that of Bishop Challoner which is also published as a tract by the Catholic Truth Society); "Nubes Testium, or a Collection of the Primitive Fathers" (London, 1686); "The Sincere Christian's Guide in the choice of a Religion" (London, 1804); "Instructions of the Epistles and Gospels of the Whole Year" (London, 1780); "The Sinner's Complaint to God" (London, 1839); "Principles and Rules of the Gospel" (London, 1718); "A Practical Catechism"; "Instructions and Devotions for Hearing Mass" (London, 1767); "Instructions for Confession, Communion and Confirmation" (Dublin, 1825); and many other similar works.

The English College in Lisbon, Portugal, was a Pontifical College for English students and seminarians from 1624 that closed in 1973. Among those studied there during the English Recusant/Penal eras were Thomas Haydock, the publisher.

You may find many of Gother's works online here.
Posted by Stephanie A. Mann at 12:00 AM