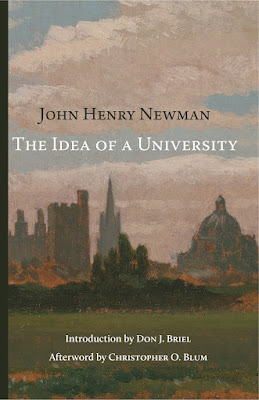 She searches for it, but doesn't find it very often.

Speaking at the Newman the Prophet: A Saint for Our Times conference held at The Angelicum in Rome before the canonization of St. John Henry Newman and the four women saints, Tracey Rowland, the St. John Paul II Chair of Theology at the University of Notre Dame (Australia) and a Member of the International Theological Commission, commented on what she sees:

First I would argue that most of our universities are what Newman would call factories, mints, and treadmills, that is, places where thousands of students, known to the university only by their student numbers, pass exams to qualify for employment in a particular field. Some small number of institutions do however retain an interest in the liberal arts and these cater mostly for students from upper middle class families where there is less concern about being trained for a particular job. However for many of these elite institutions the liberal arts are no longer linked to the transcendentals of truth, beauty and goodness, all of which are regarded as ‘bourgeois nonsense’. Instead in so many of these institutions the liberal arts have morphed into social theory subjects like gender studies and the objective is no longer to produce gentlemen but to form social activists, people who act like trained assassins against the last vestiges of Greco-Roman and Judeo-Christian civilisation.

This leaves us with only a very small number of academic institutions anywhere in the world where something like Newman’s vision has any possibility of success. Most of these institutions operate at the level of liberal arts colleges that are specifically Catholic and have been established by visionary lay people who wanted their children and grandchildren to receive the kind of formation Newman set out in his Idea of a University. Some extremely small number of such institutions can be found at the higher university level. Excluded are numerous institutions with the adjective Catholic in their title where no attempt is made to offer a specifically Christian formation of every aspect of the soul, or a specifically Christian integration of the various disciplines, but where there are merely buildings named after local Catholic worthies, a chapel, a chaplain who is a priest if you are lucky, and lots of opportunities to improve the welfare of minority groups. The accountants who normally run such institutions might be members of the Catholic Church but the institutions themselves, their ethos, the content of their curricula, their marketing strategies, the beliefs of their faculty members, administrators, janitors and librarians and the bureaucratic idioms found in their policies are not only not Christian but in many cases simply the outcome of corporate ideology. Newman would not recognise these institutions as in any sense consistent with his own vision.

Sadly enough, Newman University, our local Catholic university--which has formed a partnership with the Diocese with its School of Catholic Studies to offer undergraduate degrees to the young men in the Diocesan House of Studies before they go off to seminaries in other dioceses--announced the need to eliminate degree programs to confront a budget shortfall. Where do they look for cuts? Theology and Philosophy. among other undisclosed majors:

At their September meeting, the board of trustees at Newman University approved cutting four majors and also decided to realign two other departments.

This comes after the board approved cost cutting recommendations from their financial task force. In an update from the university's newspaper, the Vantage, they confirmed the cutting of four majors while realigning theology and philosophy. . . .

No final decisions have been made regarding which majors are going to be cut, according to Clark Schafer, the Director of University Affairs at Newman University, but classes will still be offered for those particular subjects.