A Hidden Head of St. Christopher 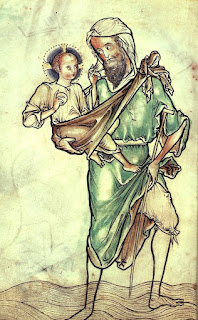 When old Catholic churches that are now Church of England parishes are renovated and restored, some surprises may occur. The parish church of St. Mary's in Lydiard Tregoze near Swindon in Wiltshire is restoring the wall paintings, etc. According to the BBC, they found something unexpected: a hidden head of St. Christopher:

Paul Gardner, from the project, described the find as "very exciting".

He said a wall plaque was removed which revealed an "amazing niche" that was "very ornate for its time" and "stuffed full of rubble and muddy lime-wash".

"The workers pulled a piece of innocuous rubble out and could see a little face staring back at them. It revealed a head thought to be that of a statue of St Christopher."

Mr Gardner thinks it was hidden by a stonemason ordered to destroy religious artefacts as part of the Reformation era which saw churches vandalised and desecrated.

"They must have been upset to have to break these things up," he said.

The church's website has this note on the restoration project:

A Grade I listed building, St. Mary’s church is a unique and important part of our national heritage. Now, a major conservation project – the first in a century – will preserve its beauty for future generations. The St Mary’s Lydiard Tregoze Conservation Project aims to renovate and conserve the church, to tell its story to a wider audience and to develop its potential as an inspiring educational resource.

Read more here. The church also has a Tudor connection as Henry VII's maternal grandmother, Margaret Beauchamp was first married to Sir Oliver St. John, a great benefactor to the church. By her second marriage to John Beaufort, the 1st Duke of Somerset, she was the mother of Margaret Beaufort, who would marry (her second marriage) Edmund Tudor, the 1st Earl of Richmond and king Henry VI's half-brother.

Saint Christopher was a very popular saint--and still is, even though his feast is not on the Roman Calendar--as the patron saint of travelers. He was invoked as one of the Fourteen Holy Helpers starting in the 14th century as the bubonic plague spread in Europe:

The existence of a martyr St. Christopher cannot be denied, as was sufficiently shown by the Jesuit Nicholas Serarius, in his treatise on litanies, "Litaneutici" (Cologne, 1609), and by Molanus in his history of sacred pictures, "De picturis et imaginibus sacris" (Louvain, 1570). In a small church dedicated to the martyr St. Christopher, the body of St. Remigius of Reims was buried, 532 (Acta SS., 1 Oct., 161). St. Gregory the Great (d. 604) speaks of a monastery of St. Christopher (Epp., x., 33). The Mozarabic Breviary and Missal, ascribed to St. Isidore of Seville (d. 636), contains a special office in his honour. In 1386 a brotherhood was founded under the patronage of St. Christopher in Tyrol and Vorarlberg, to guide travellers over the Arlberg. In 1517, a St. Christopher temperance society existed in Carinthia, Styria, in Saxony, and at Munich. Great veneration was shown to the saint in Venice, along the shores of the Danube, the Rhine, and other rivers where floods or ice-jams caused frequent damage. The oldest picture of the saint, in the monastery on the Mount Sinai dates from the time of Justinian (527-65). Coins with his image were cast at Würzburg, in Würtemberg, and in Bohemia.

His statues were placed at the entrances of churches and dwellings, and frequently at bridges; these statues and his pictures often bore the inscription: "Whoever shall behold the image of St. Christopher shall not faint or fall on that day." The saint, who is one of the fourteen holy helpers, has been chosen as patron by Baden, by Brunswick, and by Mecklenburg, and several other cities, as well as by bookbinders, gardeners, mariners, etc. He is invoked against lightning, storms, epilepsy, pestilence, etc. His feast is kept on 25 July; among the Greeks, on 9 March; and his emblems are the tree, the Christ Child, and a staff. St. Christopher's Island (commonly called St. Kitts), lies 46 miles west of Antigua in the Lesser Antilles.

In the Eastern Orthodox Church he is honored as Saint Christopher of Lycea on May 9th.
Posted by Stephanie A. Mann at 12:00 AM