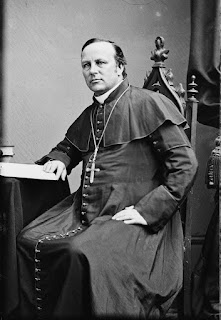 St. Elizabeth Ann Seton, the Episcopalian convert to Catholicism and first native born canonized saint of the USA, had a nephew who like her grew up Protestant and then became Catholic: James Roosevelt Bayley. From his middle name you may surmise that he was related to the Roosevelts: his mother was Grace Roosevelt, Jacobus Roosevelt's only surviving daughter by his first marriage to Maria Eliza Walton. Jacobus was FDR's great-grandfather. More about the Bayley and Roosevelt family connections here.

James Roosevelt Bayley was born on August 23, 1814 in New York City and died on October 3, 1877 as the Archbishop of Baltimore (but in Newark, NJ!). In between those dates, he had been an Episcopalian minister, a student of the Oxford Movement and the Fathers of the Church, a convert to Catholicism, an ordained priest, and the first Bishop of Newark, New Jersey.

The Oxford Movement connection is indicated by his biographer, Sister M. Hildegarde Yeager. Another source, an archived biography from the Archdiocese of Baltimore, gives this explanation for the process of his conversion:

Bayley’s work with the poor in his community, many of who were Irish immigrants, and the friendships he formed with neighboring Catholic pastors, led to his being increasingly drawn to Catholicism. Over the next three years, he read and prayed his way into the Catholic Church, receiving instruction from the future Cardinal Archbishop of New York, Fr. John McCloskey. He also received counsel from his first cousins, the children of his father’s stepsister, St. Elizabeth Ann Bayley Seton, foundress of the Sisters of Charity of St. Joseph, to whom he remained close throughout his life.

According to the Catholic Encyclopedia he went to Europe to effect his conversion to Catholicism and begin his studies for the priesthood:

Bayley's early school days were spent at Amherst College, where he once thought of going to sea and obtained a commission of midshipman in the navy. He abandoned the plan, however, and continuing his studies, entered Trinity College, Hartford, Connecticut, to prepare for the Episcopalian ministry. He graduated here in 1835 and after receiving orders was appointed rector of St. Peter's church, Harlem, New York. He resigned this charge in 1841 and went to Rome, where on 28 April, 1842, he was baptized and received into the Catholic church in the room of St. Ignatius by Father Esmond, S.J. He then entered the seminary of St. Sulpice at Paris for his theological studies. Returning to New York, he was ordained priest by Bishop Hughes, 2 March, 1844, and made a professor and the vice-president of the seminary at Fordham. He was acting president there in 1846 and was next given charge of the parish at the Quarantine Station on Staten Island, so long the residence of his grandfather, Dr. Bayley. Bishop Hughes then appointed him his private secretary, an office he held for several years and in which his administrative ability was specially manifested. . . .

When the Diocese of Newark was established he was named its first bishop and consecrated 30 October, 1853, in St. Patrick's Cathedral, New York, by Archbishop Bedini, the Apostolic Nuncio to Brazil, who wan then en route to Rome. The Bishops of Brooklyn and Burlington were consecrated at the same time, the first occurrence of such an elaborate ceremony in the United States. Bishop Bayley's work of organizing the new diocese was not easy. He had more than 40,000 Catholics mainly of Irish and German extraction, with only twenty-five priests to minister to them. There was not a single diocesan institution, no funds, and poverty on all sides.

The website of the Archdiocese of Newark has more details about his accomplishments there. He became the eighth Archbishop of Baltimore in 1872:

At the death of Archbishop Spalding of Baltimore he was promoted, on 30 July, 1872, to succeed that prelate. He left Newark with much reluctance. In 1875 as Apostolic Delegate he imposed the cardinal's biretta on Archbishop McCloskey of New York. In May, 1876, he consecrated the Baltimore cathedral, having freed it from debt. Convening the Eighth Provincial Synod of the clergy, August, 1875, he enacted many salutary regulations, particularly with regard to clerical dress, mixed marriages, and church music. Illness obliged him to ask for a coadjutor and Bishop Gibbons of Richmond was appointed to that position 29 May, 1877. The archbishop then went abroad to seek for relief, but in vain. He returned to his former home in Newark in August, 1877, and after lingering for two months, died in his old room, where he had laboured for so long. At his own request he was buried beside his aunt, Mother Seton, at the convent at Emmitsburg, Maryland.

The archived biography cited above notes that he had Bright's Disease during his tenure in Baltimore.
Posted by Stephanie A. Mann at 12:30 AM