Preview: Newman and the Rosary 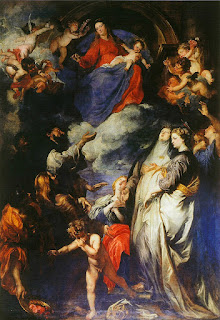 Since Monday, October 7 is the feast of Our Lady of the Rosary, Matt Swaim and I will discuss Blessed John Henry Newman and the Rosary of Our Lady that morning in our Santo Subito series on the Son Rise Morning Show, just seven days before Newman's canonization on October 13!

In the first chapter of the Apologia pro Vita Sua, Newman describes a drawing of rosary beads in one of his schoolboy notebooks:

When I was at Littlemore, I was looking over old copy-books of my school days, and I found among them my first Latin verse-book; and in the first page of it there was a device which almost took my breath away with surprise. I have the book before me now, and have just been showing it to others. I have written in the first page, in my school-boy hand, "John H. Newman, February 11th, 1811, Verse Book;" then follow my first Verses. Between "Verse" and "Book" I have drawn the figure of a solid cross upright, and next to it is, what may indeed be meant for a necklace, but what I cannot make out to be anything else than a set of beads suspended, with a little cross attached. At this time I was not quite ten years old. I suppose I got these ideas from some romance, Mrs. Radcliffe's or Miss Porter's; or from some religious picture; but the strange thing is, how, among the thousand objects which meet a boy's eyes, these in particular should so have fixed themselves in my mind, that I made them thus practically my own. I am certain there was nothing in the churches I attended, or the prayer books I read, to suggest them. It must be recollected that Anglican churches and prayer books were not decorated in those days as I believe they are now.

"Mrs. Radcliffe" refers to Ann Radcliffe and "Miss Porter" to Jane Porter. They were both popular novelists in the early nineteenth century. Radcliffe wrote Gothic Novels like The Italian and The Mysteries of Udolpho; the Catholicism depicted in these novels is cruel and corrupt, with images of the confessional and convents, monks and nuns, as sinister and sadistic. Porter's historical novels, like The Scottish Chiefs (about William Wallace), The Pastor's Fireside ( the Black Legend of Spain!) and Thaddeus of Warsaw, set in 18th century Poland, also reflected common English and Scottish prejudice against Catholics.

So no wonder Newman in 1854 was so surprised to see an image of the Rosary--or what he took to be rosary beads--on the cover of notebook from 1811!

Since I've already described the development of Newman's Anglican devotion to the Blessed Virgin Mary through the influence of Richard Hurrell Froude and his study of the Fathers of the Church, I'll just close today with the comment about the Rosary in Newman's later years. He offered his last Mass on Christmas Day in 1889. Because of advancing weakness and blindness, he could long longer read the Breviary--so he prayed the Holy Rosary instead.

On Monday, October 7: Newman's advice on how to pray the Rosary.
Posted by Stephanie A. Mann at 12:00 AM