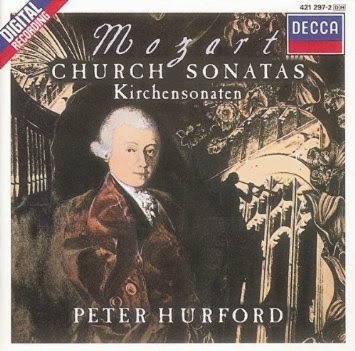 Over our 23-year and counting marriage, my husband and I have purchased many compact discs of many musical types: I'm a little bit classical and he's a little bit rock and roll. We went "shopping" in the cd racks last Friday night and found this 1988 recording of Mozart's Church Sonatas, or Epistle Sonatas with Peter Hurford as organist, the Amsterdam Mozart Players, and several other artists.

So soon after reading Mosebach's book on Catholic liturgy, I thought of how strangely these musical interludes must have broken up the celebration of the Mass. They were performed between the Epistle and the Gospel and thus pre-empted the Gradual and the Alleluia! They are all sprightly and, as the liner notes say, "their purpose was to highlight and herald the proclamation of the Gospel", to announce the Good News and thus all are in Major keys.

Mozart wrote them for the two Archbishops of Salzburg he served, Sigismund and Colloredo. Also according to the liner notes by Ann Bond, three of these 17 Epistle Sonatas were designated for specific Masses, and I've linked recordings of two of those Masses that include the Epistle Sonata:

The cd is still readily available at Amazon.com and other online cd shops--ours has the London logo, not the Decca.
Posted by Stephanie A. Mann at 12:30 AM