The Fire of London and the Gregorian Calendar 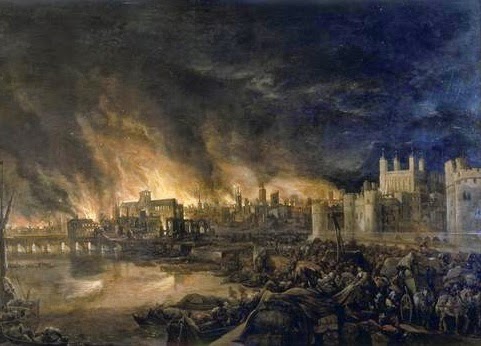 The Great Fire of London began on September 2 in Pudding Lane 348 years ago today (1666) and would burn until September 5, destroying 13,200 houses, 87 parish churches, and many government buildings. King Charles II and his brother James, the Duke of York worked hard to direct fire-fighting efforts, but the fire's penultimate day, Tuesday, September 4th was the day of greatest destruction, as St. Paul's Cathedral caught fire and was ruined that day. This was the great medieval, Gothic cathedral built between 1089 and 1314, containing wondrous stained glass and with a tall spire. It had of course fallen into disrepair, having been damaged by Puritan forces during the Civil War.

Its destruction gave Sir Christopher Wren the opportunity to design and build a new Anglican Cathedral influenced by the design of St. Peter's in Rome and Val-de-Grace in Paris, along with 50 other Anglican churches.

In the aftermath of the fire, someone had to be blamed, and Catholics were held responsible. A French watchmaker did claim responsibility (as an agent of the Pope) but after he was hung at Tyburn, authorities found out he had arrived in London two days after the fire started. Too late!

Charles II commissioned The Monument to the Great Fire of London, which Robert Hooke, not Sir Christopher Wren, designed, and it was built between 1671 and 1677. In 1681, in the midst of the Popish Plot, words were added to the Monument to reflect fear of Catholics and blame them for the Great Fire:

'Here by ye permission of heaven, hell broke loose upon this protestant city from the malicious hearts of barbarous papists, by hand of their agent Hubert, who confessed, and on ye ruines of this place declared the fact for which he was hanged (vizt) that here began that dredfull fire, which is described and perpetuated on and by the neighbouring pillar. Erected Anno 1681 in the Majoraltie of Sr Patience Ward Kt.’

Where London's column, pointing at the skies,
Like a tall bully, lifts the head, and lies.

Because, remember, authorities already knew that Hubert could not have started the Great Fire--so they inscribed a lie. During the reign of James II, the anti-Catholic words were removed; with the Dutch invasion and coup d'etat of the Glorious Revolution they were restored and remained there until 1830 after Catholic Emancipation.

It was also on September 2 in 1752 that England finally caught up with the times, adopting the Gregorian calendar. One reason it took so long (Pope Gregory XIII introduced the reformed calendar in 1582, correcting errors in the calculation of Easter presented by the old Julian Calendar) was indeed the source of the correction: the Papacy and the Catholic Church. History Today has an article in its archives about England finally admitting that Rome could be right about something--but it's behind the pay wall:

In 1750 England and her empire, including the American colonies, still adhered to the old Julian calendar, which was now eleven days ahead of the Gregorian calendar, introduced in 1582 by Pope Gregory XIII and in use in most of Europe.

Attempts in the sixteenth and seventeenth centuries to adopt the new calendar had broken on the rock of the Church of England, which denounced it as popish. The prime mover in changing the situation was George Parker, second Earl of Macclesfield, a keen astronomer and a Fellow of the Royal Society. He was assisted in his calculations by his friend James Bradley, the astronomer royal, and he gained the influential support of Philip Dormer Stanhope, the sophisticated fourth Earl of Chesterfield (of letters to his son fame), who squared it with Henry Pelham’s initially reluctant government.

It's just so sad and unjust when prejudice and bigotry influence our acceptance of facts: Catholics did not set fire to the city of London, there was no Popish Plot, and the Julian Calendar needed to be reformed.

Note that some think the Gregorian calendar needs to be replaced: here's some analysis of the perceived problems and proposed solutions.
Posted by Stephanie A. Mann at 12:30 AM