In The Week Michael Brendan Dougherty writes about the choices Catholics faced in Ireland after "The Glorious Revolution":
When William of Orange defeated his father-in-law, the deposed King James II, along with his Irish Catholic allies at the Boyne in 1690, Parliament was determined that an Irish Catholic uprising never threaten their rule again, and so they passed penal laws, or "papist codes." As author Thomas Keneally put it, these codes were "aimed at keeping the native Irish powerless, poor, and stupid."
The details of these laws should still shock us. All Catholic bishops, and religious clergy (friars, etc), had to leave the country or face death. Any bishops coming from foreign countries were to be killed. All remaining Catholic priests were to sign an oath that was abominable to their conscience, or be killed. Catholic priests caught "perverting" a Protestant (i.e., receiving them into the church, or marrying them to a Catholic) were to be killed. Ordinary Catholics could not have schools, could not teach in schools, and could not be the guardian of a child. They could not travel abroad to attend schools. They could not own a horse worth more than five pounds. They could not accept substantial gifts from Protestants. Catholics could not live within five miles of incorporated towns. (This law applied to 80 percent of the island's population.)
Any decent Catholic church building was confiscated and given to the official "Church of Ireland." Catholics were to be whipped if they refused to work on Catholic holidays or visited holy sites. They could not own weapons. Upon death, Catholics were to split their lands among all their children, unless a child or a child's spouse was a Protestant, in which case the Protestant child was given the entire estate. Catholics were excluded from all professions and from voting. No tradesman was allowed to have more than two Catholic apprentices. There were standing bounties made available to "priest-hunters." The old Catholic Encyclopedia summarizes the papist codes this way: "The law presumed every Catholic to be faithless, disloyal, and untruthful, assumed him to exist only to be punished, and the ingenuity of the Legislature was exhausted in discovering new methods of repression."
Edmund Burke called the Penal Laws "a machine of wise and elaborate contrivance, as well fitted for the oppression, impoverishment and degradation of a people, and the debasement in them of human nature itself, as ever proceeded from the perverted ingenuity of man."
Dougherty notes the Penal Laws' results:
Now, these laws were not always or effectively enforced. Irish Catholics found ways to educate their children at illegal "hedge schools." The Catholic Church continued to send bishops to the isle, and some people found ways of sending their children to Spain, France, or Rome for an education. The penal laws failed to achieve their aim of de-Catholicizing Ireland. The faith survived because it thrives in persecution and because of the support of institutions beyond England's reach. But an older map of the gaeltacht, where the Irish language is still a mother tongue, doubles as a map of places where the difficulty of the terrain and the wildness of native resistance finally restrained the English cupidity for Irish land and estates. 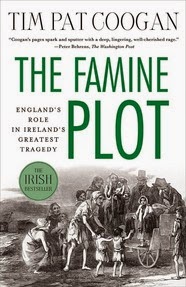 The full results of these English policies would unfold over centuries. A century and a half after the codes were installed, Irish Catholics were concentrated on poorer lands, relied far too heavily on calorie-rich potatoes, and had no margin for failure when it came to the rent system of agriculture. When the famine came in the 19th century, over 1 million Irish died of starvation or disease. Nearly 2 million more emigrated. In some waves, about one in five emigrants died on the journey. Ireland lost one quarter of its population in just over a decade. The prefamine population of Ireland was higher in 1840 than it is even today. As Ireland's men and children were dying, Parliamentarians speculated that the crop failure was "a Visitation of Providence, an expression of divine displeasure," and entertained themselves with cartoons depicting the Irish as simians, while they dined on still-cheap Irish beef and butter.
Statements like that certainly support Tim Pat Coogan's view of England's Role in The Great Hunger:
During a Biblical seven years in the middle of the nineteenth century, Ireland experienced the worst disaster a nation could suffer. Fully a quarter of its citizens either perished from starvation or emigrated, with so many dying en route that it was said, "you can walk dry shod to America on their bodies." In this grand, sweeping narrative, Ireland''s best-known historian, Tim Pat Coogan, gives a fresh and comprehensive account of one of the darkest chapters in world history, arguing that Britain was in large part responsible for the extent of the national tragedy, and in fact engineered the food shortage in one of the earliest cases of ethnic cleansing. So strong was anti-Irish sentiment in the mainland that the English parliament referred to the famine as "God's lesson."

Drawing on recently uncovered sources, and with the sharp eye of a seasoned historian, Coogan delivers fresh insights into the famine's causes, recounts its unspeakable events, and delves into the legacy of the "famine mentality" that followed immigrants across the Atlantic to the shores of the United States and had lasting effects on the population left behind. This is a broad, magisterial history of a tragedy that shook the nineteenth century and still impacts the worldwide Irish diaspora of nearly 80 million people today.
Posted by Stephanie A. Mann at 12:30 AM