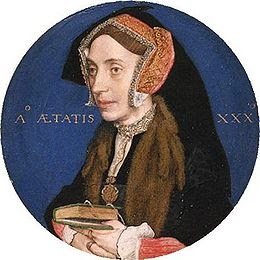 In The Wall Street Journal, Barrymore Laurence Scherer (I love that name!) writes about an exhibition at the Metropolitan Museum of Art on miniatures, and comments on Hans Holbein's portraits of William and Margaret Roper:

Two of the show's finest miniatures are also its earliest ones: a pair by Hans Holbein the Younger (1497/98–1543) depicting the wealthy lawyer and parliamentarian William Roper and his wife, Margaret. Holbein, celebrated for his Tudor court portraits in oils, had studied this diminutive art with England's first miniaturist, Lucas Horenbout, and during the last decade of his life produced a series of circular miniatures that set a standard for his successors.

As in Holbein's full-size portraits, these two are persuasively lifelike in their sobriety, with details that add to our understanding of each sitter's character. There is no sense that Holbein attempted to idealize Roper's heavy-lidded eyes and protruding lower lip or Margaret's long nose and gaunt features. Both portraits are inscribed with the respective sitter's age in Latin—Roper looks his 42 years, but Margaret looks rather elderly for 30 until you realize that this eldest daughter of Sir Thomas More had seen her father made Lord Chancellor of England by Henry VIII only to be persecuted and finally executed when he opposed Henry's schism with the Roman Catholic Church and repudiation of papal supremacy.

Not to mention rescuing her father's head from Tower Bridge!

Unlike most of the bust-length portraits in this show, these two include the sitters' hands. Roper clasps the edges of his fur-lined cloak with both hands, showing off his large ring while suggesting that he is about to address a jury. Margaret, wearing a magnificently embroidered English hood, holds a finely bound book with gold clasps. Her left thumb marks her place, pointedly suggesting actual reading. This is a significant gesture because—unusual for the period—More gave all his daughters the same Classical education that he gave his son. Margaret herself was noted for her learning.

She even corrected Erasmus.
Posted by Stephanie A. Mann at 1:00 AM