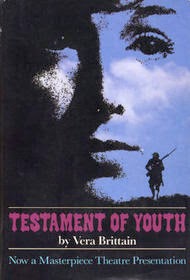 I read Testament of Youth while or after watching the 1980 Masterpiece Theatre five episode mini-series starring Cheryl Campbell as Vera Brittain:

All young Vera Brittain wanted at first was the opportunity to go to college, like her brother. That may not sound like much now, but middle class young ladies from small towns were expected to settle down with spouses, not studies, in pre-World War I England. This dramatization of Vera Brittain's 1933 autobiography--a memorial to a generation devastated by World War I--chronicles her experiences as a nurse in London and Malta and at the front in France. It also tells in heartbreaking detail the loss of her brother, her fiancé, and her two best friends on the fields of France and Italy.

Next year a new movie will be released that adapts her memoir. From the early trailer, it looks like the movie might focus on the romance and not continue the story of Brittain's return to Oxford after the war:


The movie filmed earlier this year at the University of Oxford so at least there will be some glimpses of its towers and streets. I wonder if the movie will quote the poem Roland Leighton wrote to Vera:

The sunshine on the long white road
That ribboned down the hill,
The velvet clematis that clung
Around your window-sill
Are waiting for you still.

Again the shadowed pool shall break
In dimples at your feet,
And when the thrush sings in your wood,
Unknowing you may meet
Another stranger, Sweet.

And if he is not quite so old
As the boy you used to know,
And less proud, too, and worthier,
You may not let him go---
(And daisies are truer than passion-flowers)
It will be better so.

I also wonder if Dorothy L. Sayers is featured in the movie at all--they both attended Somerville College, which was opened for women to attend Oxford in 1879. Here are their biographies on the college website: Dorothy L. Sayers and Vera Brittain.
Posted by Stephanie A. Mann at 1:00 AM