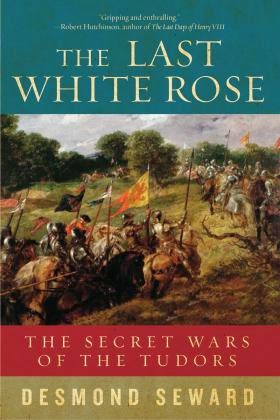 As Kirkus Reviews describes this book:

The Tudors have been written about ad nauseam, but historian Seward (Eugenie: The Empress and Her Empire, 2004, etc.) opens another branch of study harkening back to their beginnings at the Battle of Bosworth of 1485.

The defeat of King Richard III did not eliminate all claimants to the crown. After his victory, Henry VII spent his reign ruthlessly quashing one after another. The genealogical tables at the front of Seward’s book are indispensable for this and any English history, as authors must carefully refer to characters by one name only. For instance, John de la Pole, the Duke of Suffolk, and his sons, John, Earl of Lincoln, and Edmund, Earl of Suffolk, had claim to the crown, and all suffered for it. Choosing a single moniker for each character is preferred, except, of course, that Henry VII and his son, Henry VIII, tended to bestow and take away titles according to whim or worry. The paranoia of Henry VII was actually justified, as the Yorkist family had many eligible candidates, and popular support for restoring their reign was widespread. Challengers found support from Margaret of Burgundy, sister to kings Richard III and Edward IV, the French, who were always ready to stir things up, and the Irish, firmly in the Yorkist camp. By far the most interesting pretender was Richard de la Pole, who was educated at Henry VIII’s expense, created a cardinal by the pope without ordination and considered as a mate for Princess Mary. (sic!)* Henry VIII was pathologically suspicious and saw conspiracies in every shadow, and the cream of England’s aristocracy paid the price. The story of the descendants of the White Rose adds yet another black mark against the first two Tudors, as if they needed more.

A fresh look at a well-worn field of study, appropriate for general readers.

*That's a strange error: I'm sure the reviewer meant to cite Reginald Cardinal Pole as "the most interesting pretender", although there was a pretender named Richard de la Pole who died at the Battle of Pavia in 1525, fighting alongside King Francis I of France. After the battle, Richard de la Pole was buried in the Basilica of San Pietro in Ciel d'Oro--where St. Augustine of Hippo is also buried. Henry VIII rejoiced greatly when he heard that Richard de la Pole had died: one fewer White Rose or rival to get rid of by assassination or execution!

One thing that Seward does very well here is tell his story without too many digressions--he tells enough of what is going on outside of these rebellions and pretenders for necessary context--but not so much that he writes another book about Henry VIII, his six wives and four children, the English Reformation, the Dissolution of the Monasteries, or the Pilgrimage of Grace. In The Last White Rose: The Secret Wars of the Tudors, he depicts both Henry VII and Henry VIII as most uneasy monarchs, fearful of and vindictive toward anyone who had a claim upon the crown the Tudors plucked from the House of York. Any noble family, like the Howards, the de la Poles, the York/Poles (Margaret of York and her grown children), the Courtenays, the Staffords, etc., had much to fear from the Tudors, whether or not they really were plotting to supplant or succeed their monarch. Seward notes that the White Rose faction missed their one great chance when they did not get behind--or rather, take leadership of--the Pilgrimage of Grace. With an army of 30 to 40 thousand behind them, the House of York could have taken England back from the Tudors, stopped the English Reformation and the Dissolution of the Monasteries.
Posted by Stephanie A. Mann at 12:30 AM