The Franciscan Reformation Martyrs in Ireland 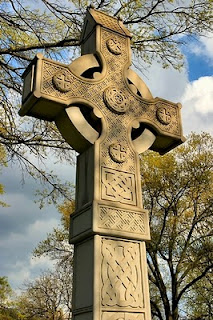 Throughout Supremacy and Survival: How Catholics Endured the English Reformation, I refer to events in Ireland, even though my focus is on England itself. Ireland fits into the story I'm telling often--and certainly deserves study on its own--but I never focus on the Irish martyrs the Church has beatified and canonized. There are many, and they represent many, many more. These four martyrs are honored on this day among the Franciscans of Ireland:

Patrick O’Healy (about 1543-1579) was probably born in Co. Sligo or Co. Leitrim. He was a Franciscan novice in 1561. He was trained and educated for the priesthood in Spain. Sent to Rome in 1575, he impressed the Minister General and the Pope and the following year was appointed Bishop of Mayo. Some years later he reached Ireland. In the persecutions there, he was betrayed and captured and found guilty of lèse-majesté. He was hanged at Kilmallock, Co Limerick.

Conrad (Con) O’Rourke (about 1549-1579) probably joined the Franciscans at Creevelea friary, Dromahaire, Co Leitrim. He was probably ordained on the continent and returned to Ireland with Bishop O’Healy in 1579. He was captured and hanged with the bishop at Kilmallock.

Conor O’Devany (about 1532-1612) was born in Raphoe, Co Donegal and became a Franciscan in the friary of Donegal about 1550. He studied on the continent and after ordination was appointed Bishop of Down and Connor in 1582, being consecrated in the Church of S. Maria dell’Anima in Rome. Shortly afterwards he returned to Ireland. He was arrested in 1588 and imprisoned in Dublin Castle. He was soon released and continued his pastoral work in his diocese under the patronage and protection of the O’Neills. He was arrested in 1611, found guilty of treason and hanged in Dublin.

John Kearney (1619-1653) was born in Cashel, Co Tipperary. He joined the Franciscans at their friary in Kilkenny. After his novitiate, he went to Leuven in Belgium and was ordained in Brussels in 1642. He returned to Ireland and taught in Cashel and Waterford. He was much admired for his preaching. In 1650 he became guardian of Carrick-on-Suir, Co Tipperary. In the Cromwellian persecutions, he was arrested for exercising his priesthood and was hanged in Clonmel, Co Tipperary. He was buried in the chapter hall of the suppressed friary of Cashel. These four Irish Franciscan martyrs together with 13 other Irish martyrs were beatified by John Paul II in 1992.

“My soul, give praise to the Lord”.

And how can we fail to sing the praises of the seventeen Irish Martyrs being beatified today? Dermot O’Hurley, Margaret Bermingham Ball, Francis Taylor and their fourteen companions were faithful witnesses who remained steadfast in their allegiance to Christ and his Church to the point of extreme hardship and the final sacrifice of their lives.

All sectors of God’s people are represented among these seventeen Servants of God: Bishops, priests both secular and religious, a religious brother and six lay people, including Margaret Bermingham Ball, a woman of extraordinary integrity who, together with the physical trials she had to endure, underwent the agony of being betrayed through the complicity of her own son.

We admire them for their personal courage. We thank them for the example of their fidelity in difficult circumstances, a fidelity which is more than an example: it is a heritage of the Irish people and a responsibility to be lived up to in every age.

In a decisive hour, a whole people chose to stand firmly by its covenant with God: “All the words which the Lord has spoken we will do”. Along with Saint Oliver Plunkett, the new Beati constitute but a small part of the host of Irish Martyrs of Penal Times. The religious and political turmoil through which these witnesses lived was marked by grave intolerance on every side. Their victory lay precisely in going to death with no hatred in their hearts. They lived and died for Love. Many of them publicly forgave all those who had contributed in any way to their martyrdom.

The Martyrs’ significance for today lies in the fact that their testimony shatters the vain claim to live one’s life or to build a model of society without an integral vision of our human destiny, without reference to our eternal calling, without transcendence. The Martyrs exhort succeeding generations of Irish men and women: “Fight the good fight of the faith; take hold of the eternal life to which you were called . . . keep the commandment unstained and free from reproach until the appearing of our Lord Jesus Christ”.

To the Martyrs’ intercession I commend the whole people of Ireland: their hopes and joys, their needs and difficulties. May everyone rejoice in the honour paid to these witnesses to the faith. God sustained them in their trials. He comforted them and granted them the crown of victory. May he also sustain those who work for reconciliation and peace in Ireland today!

The complete list of martyrs and more about them here: