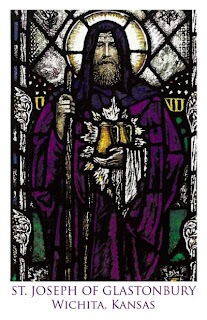 I have been asked several times if I know of opportunities for the Anglican Ordinariate in my home town of Wichita, Kansas. Looking at the Episcopalian communities here, I don't see any. The mainline Episcopalian churches have accepted women as priests, evidently, because they have female vicars, curates, and deacons. There was a breakaway group from St. Stephen's Episcopal Church in 2004, which formed St. Michael the Archangel Antiochian Orthodox Church (Western Rite) . We do have a traditional Anglican parish, St. Joseph of Glastonbury. It is part of the Holy Catholic Church Anglican Rite in the Diocese of Holy Trinity and the Great Plains, which is not affiliated with the Archbishop of Canterbury. That Diocese proclaims:

We welcome you in the Name of the Father, the Son and the Holy Ghost, Amen. The Diocese of Holy Trinity and Great Plains is in the province of the Holy Catholic Church Anglican Rite. We are an American family of traditional Anglican Churches, within the One, Holy, Catholic and Apostolic Church. We continue in the historic catholic faith, apostolic order and liturgical worship, as the Lord taught, the apostles preached and Church Fathers preserved.

Our worship is based on Holy Scriptures, Apostolic Tradition, and the use of the 1928Book of Common Prayer and the Anglican/American Missal.

The Mission of the diocese is to perpetuate historic catholic faith, Apostolic order and Sacramental worship through the unbroken apostolic succession of the Anglican Tradition until His second coming!

They believe they have sacramental ordination (male only) and believe in the seven Sacraments as outward signs of inward grace. The Holy Catholic Anglican Rite community believes it is the via media between Roman Catholicism and Protestantism--the English Catholic Church. Its website does not include a statement about the role of the Pope, the Bishop of Rome.

St. Joseph's Church is a parish of the Holy Catholic Church (Anglican Rite), which stands in the unbroken continuity of Apostolic Faith (teaching) and Order (organization) given by our Lord Jesus Christ to His Church. Our faith is based on the Word of God found in Holy Scripture, and on the first seven Ecumenical Councils held by the undivided Christian Church. We are dedicated solely to the Glory of God and the uncompromised living-out of His teachings. Our core beliefs are in the Holy Scriptures as the revealed Word of God; salvation is found only through Jesus Christ: the sanctity of life beginning at conception, and marriage as a lifelong commitment between one man and one woman. Our Services continue the Liturgy of the Anglican Missal and the Book of Common Prayer (English, 1549, American, 1928, and Canadian, 1962.)

Therefore, they have already separated themselves from the Anglican Communion to develop their own branch of the branch under the branch theory of the via media. I don't see them as a group wanting to join a Catholic ordinariate, based on a surface investigation at least.

St. Therese the Little Flower in the Blue Hills neighborhood of Kansas City is the closest opportunity I know of. Earlier this year the parish hosted a conference for those interested in the Ordinariate and people from Nebraska, Illinois, Indiana, Iowa, Arkansas, Oklahoma, and Texas attended. Note: Kansas not mentioned.
Posted by Stephanie A. Mann at 2:42 AM