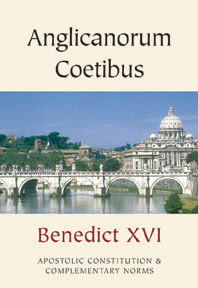 At the recent meeting of the Catholic bishops in the United States, Cardinal Wuerl made an announcement about the status of an Anglican Ordinariate here:

His Eminence, Donald Cardinal Wuerl, delivered an historic address - summarizing the current state of the Anglican Ordinariate in American - to the United States Conference of Catholic Bishops on Wednesday, June 15 at their spring General Assembly in Bellevue, Washington.

Cardinal Wuerl's remarks underscored the fact that clergy and parishes from Episcopal and Anglican jurisdictions in America have, indeed, accepted the invitation from the Holy Father in an apostolic constitution issued in November 2009, "Anglicanorum coetibus."

They will be joining those clergy and parishes from England and Wales who have already been established through the Personal Ordinariate of Our Lady of Walsingham.

The Cardinal outlined a process that would include evaluation, screening and formation of former Anglican bishops and priests as well as ways in which U.S. Bishops can aid in the process of bringing in clergy and parishes.

There are already Anglican Use parishes in Catholic dioceses in the USA so the structure of the ordinariate might have to account for them, but Cardinal Wuerl presented some very hopeful numbers, according to the Catholic Herald:

As many as 100 US Anglican priests and 2,000 lay people could be the first members of a US Personal Ordinariate for former Anglicans who want to enter into full communion with the Catholic Church, Cardinal Donald Wuerl of Washington has said.

Cardinal Wuerl was appointed by the Vatican last September to guide the incorporation of Anglican groups into the Catholic Church in the United States under Anglicanorum coetibus, an apostolic constitution issued by Pope Benedict XVI in November 2009.

At a news conference, Cardinal Wuerl said he "wouldn’t be surprised" if the Vatican were to establish the US ordinariate by the end of the year. "I think it will be sooner rather than later," he said. He was speaking after he had addressed the US bishops on the subject.
Posted by Stephanie A. Mann at 2:11 AM