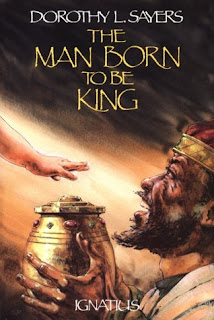 Dorothy Leigh Sayers, novelist, translator, and Anglo-Catholic Christian apologist, was born on June 13, 1893; she died on December 17, 1957. She was born at the Christ Church Cathedral headmaster's house in Oxford because her father was chaplain. She attended Somerville College, the women's college in Oxford and received an MA degree in 1920. Sayers worked in the advertising field as a copywriter for several years, working on Guinness and Colman's Mustard accounts.

The Dorothy L. Sayers Society provides more detail about her life and works.

Although she is better known for her Lord Peter Wimsey series of mystery novels, I have always appreciated her more for the translation of Dante's Divine Comedy (particularly her introductions to Hell and Purgatory) and her Christian apologetics and other works. Like C.S. Lewis and T.S. Eliot, she stands high in my short-list of 20th century Anglo Catholics.

I am very sorry that Penguin diverted her from completing the translation of Paradise to translate The Song of Roland! I know that her translation of the Divine Comedy, left incomplete at her death, is not considered the best--but I thought her introductions displayed an excellent understanding of Catholic doctrine and medieval culture.

Creed or Chaos, The Mind of the Maker, and The Whimsical Christian all offer good orthodox Christian doctrine and a valid theological viewpoint. Her emphasis -- her insistence -- on the importance of doctrine called Blessed John Henry Newman's Oxford Sermons to mind.

As she notes, the "Dogma is the Drama"; it is in the Truth of Christianity that she found the dramatic tension that informs my favorite work of hers, the series of BBC radio plays called The Man Born to be King. Because she acknowledges the doctrine of the Incarnation and acknowledges the theological implications of that doctrine she has drama on her hands. How can God be Man?--"From the purely dramatic point of view the theology is enormously advantageous, because it locks the whole structure into a massive intellectual coherence. . . . A loose and sentimental theology begets loose and sentimental art-forms; an illogical theology lands one in illogical situations; an ill-balanced theology issues in false emphasis and absurdity." I take the latter to mean that a dramatic presentation of Jesus Christ according to any of the Christological heresies of the early church--for instance, Docetism or Arianism--would be false and absurd. (Think of The Last Temptation of Christ!)

In the same introduction to the published version of the BBC plays, Sayer notes: "Dogma is the grammar and the vocabulary of [the writer's] art." The drama comes when depicting the reality of the Creed--the tension between the phrases in the Nicene Creed "God from God, Light from Light, True God from True God" and "He suffered under Pontius Pilate." (What Sayers does with the latter phrase is brilliant, when Pilate's wife reports her dream before the Crucifixion.) I highly recommend the plays and just wish a recorded version was available.