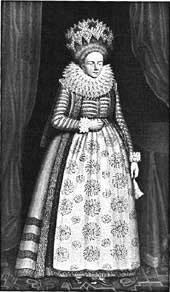 Thanks to Peter Freeman, I'll put this in the file labelled "You Learn Something New Everyday"! From the new on-line crisismagazine, the story of Lady Elizabeth Falkland, playwright and Catholic convert. She was born in 1585, married Henry Cary, 1st Viscount Falkland in 1600 and died in 1639. According to the article, Lady Falkland is

the first known woman to publish an original play in English with the Tragedy of Miriam the Fair Queen of Jewry in 1613. Raised a Protestant, she was something of a celebrity convert in her day.

Despite the intervening four hundred years of history, aspects of Cary’s life after her conversion will seem familiar to modern Catholics. Reportedly, she gave up sugar for Lent; her Protestant husband had to remind her not to eat fish on Fridays, and she was perpetually worried about her children’s faith while raising them in a country that was openly hostile to her religious beliefs.

Yet much of her life also seems quite alien. Perhaps a few of us have been estranged from our families on account of our faith; fewer have kidnapped our own children to prevent them from falling under the influence of Protestant wards. Fewer still have had the king of England place them under house arrest for converting to papism.

That we can say so much about her personal life gives Cary a distinct advantage over Shakespeare in these religious debates. Whereas Shakespeare’s biography is largely lost to time and confined to a few legal documents, Cary’s biography has been preserved for us in a manuscript — The Lady Falkland: Her Life — purportedly composed by her own daughter, another Catholic convert and a Benedictine nun.

The manuscript not only recounts Cary’s conversion to Catholicism, it also offers a kind of how-to guide for inspiring faith in a new generation of Catholics through “indirect evangelization.”

Her method of evangelization, with the aim of bringing her children to the Catholic faith, was to invite both Protestant and Catholic guests to dinner whose conversation would naturally turn to religion and whose conversation stayed measured, rational, and fair. She believed that hearing both sides, her children would choose the right church! Four of her daughters became Benedictine nuns (one wrote her biography) and one of her sons became a Catholic priest, so it worked.

Her husband was honored by both James I and Charles I with important offices--including Lord Deputy of Ireland--but according to the wikipedia article, it does not seem he was a very effective adminstrator at all.
Posted by Stephanie A. Mann at 2:04 AM