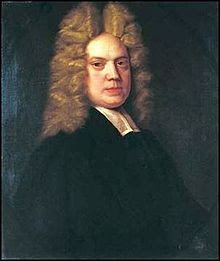 Henry Sacheverell died on June 15, 1724; he is best known for losing a case that really made him the winner! In 1709 he preached a fiery sermon on the Fifth of November, commemorating not only the discovery of the Gunpowder Plot but the beginning of the Glorious Revolution with William of Orange's invited invasion. But Sacheverell did not condemn the Catholic plotters or the evil King James II--he railed against the Whigs, the policy of toleration of dissenters, and those in the Church of England who allowed that policy to be practiced. When the sermon was published, Parliament impeached him and found him guilty. His sermons were to be burned and he was banished from the pulpit for three years.

The public, however, turned this Whig victory against one of their critics against them. The Tories won the next election and the Whigs were swept out of power. Henry Sachaverell ended up with a very comfortable living, St. Andrew's Holburn. More about the story here.
Posted by Stephanie A. Mann at 2:03 AM