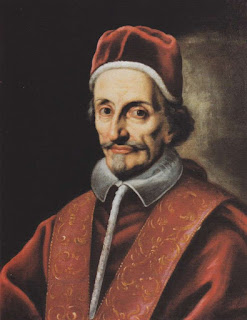 Benedetto Odescalchi, the future Pope Innocent XI was born in Como, Italy on May 16, 1611. He was elected Pope on September 21, 1676, over the objections of King Louis XIV of France, succeeding Pope Clement X. He died on August 11, 1689 but his feast on is August 12 (St. Clare of Assisi is celebrated on August 11--that's also why Blessed John Henry Newman's feast is on October 9 even though he died on August 11, to avoid conflict with such an important saint).**

Speaking of conflicts, Pope Innocent XI and Louis XIV were in conflict throughout his reign and that conflict spilled over into the pope's official relations with King James II of England, even as that monarch tried to advance Catholic freedom of worship in his country, according to the Catholic Encyclopedia:


The tension between the pope and the king [Louis XIV] was still increased by the pope's procedure in filling the vacant archiepiscopal See of Cologne. The two candidates for the see were Cardinal Wilhelm Fürstenberg, then Bishop of Strasburg, and Joseph Clement, a brother of Max Emanuel, Elector of Bavaria. The former was a willing tool in the hands of Louis XIV, and his appointment as Archbishop and Elector of Cologne would have implied French preponderance in north-western Germany. Joseph Clement was not only the candidate of Emperor Leopold I of Austria but of all European rulers, with the exception of the King of France and his servile supporter, King James II of England. At the election, which took place on 19 July, 1688, neither of the candidates received the required number of votes. The decision, therefore, fell to the pope, who designated Joseph Clement as Archbishop and Elector of Cologne. Louis XIV retaliated by taking possession of the papal territory of Avignon, imprisoning the papal nuncio and appealing to a general council. Nor did he conceal his intention to separate the French Church entirely from Rome. But the pope remained firm. The subsequent fall of James II of England destroyed French preponderance in Europe and soon after Innocent's death the struggle between Louis XIV and the papacy was settled in favour of the Church. Innocent XI did not approve the imprudent manner in which James II attempted to restore Catholicism in England. He also repeatedly expressed his displeasure at the support which James II gave to the autocratic King Louis XIV in his measures hostile to the Church. It is, therefore, not surprising that Innocent XI had little sympathy for the Catholic King of England, and that he did not assist him in his hour of trial. There is, however, no ground for the accusation that Innocent XI was informed of the designs which William of Orange had upon England, much less that he supported him in the overthrow of James II. . . .

Yesterday, I highlighted Innocent XI's refusal to allow Father Edward Petre, SJ, to accept the (Anglican?) See of the Archdiocese of York at James II's request.

Pope Innocent, like Pope St. Pius V before, rallied the Holy League to defend Europe from the invasion of the Ottoman Empire:

It was due to Innocent's earnest and incessant exhortations that the German Estates and King John Sobieski of Poland in 1683 hastened to the relief of Vienna which was being besieged by the Turks. After the siege was raised, Innocent again spared no efforts to induce the Christian princes to lend a helping hand for the expulsion of the Turks from Hungary. He contributed millions of scudi to the Turkish war fund in Austria and Hungary and had the satisfaction of surviving the capture of Belgrade, 6 Sept., 1688.

Because of his assistance to the Austro-Hungarians during the siege of Vienna and until the Turks were driven from Belgrade, he is called the "Savior of Hungary." Pope Leo XIII paid tribute to him in his August 22, 1886 encyclical Quod Multum on the liberty of the Church, written to the Bishops of Hungary:

We have long and ardently desired an opportunity to address you with an apostolic letter. Just as We have addressed the bishops of many other nations, We desire to inform you of Our plans, which concern the prosperity of the Christian cause and the salvation of the Hungarian nation. These days present Us with an excellent opportunity, since Hungary is celebrating the liberation, two centuries ago, of Budapest. - That victory will stand out forever in the memory of the Hungarian people. It was granted to your ancestors, because of their strength and perseverance, to recapture their capital city, which for a century and a half had been occupied by their enemies. That the grace and memory of this divine blessing might remain, Pope Innocent XI justly decreed a celebration throughout all Christendom in honor of St. Stephen, the first of your apostolic kings, on the second day of September, the anniversary of this great event. Moreover it is well-known that the Apostolic See took a significant part in the almost spontaneous victory three years before over the same foe at Vienna. This victory, rightly attributed in great part to the apostolic efforts of Pope Innocent, began the decline of the influence of the Mohammedans in Europe. - Besides, even before that age and under similar circumstances, Our predecessors assisted the Hungarian forces with counsel, aid, money, and treaties. From Callistus III to Innocent XI, many Roman Ponfiffs are recorded whose names deserve to be honored for their activity in such affairs.

He was beatified by Pope Pius XII in 1956. There's a video of a new report of the event!

**Note that Newman's feast of October 9 will be the mandatory feast to be celebrated on that date in England and Wales, once he has been canonized. The optional memorials that are on that date will be moved:

It requests the optional memorials of St Denis and Companions and St John Leonardi be transferred to 10 October.
Posted by Stephanie A. Mann at 12:30 AM