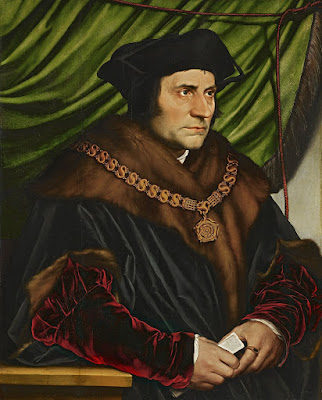 Sir Thomas More resigned as Lord Chancellor of England on May 16, 1532 after the Convocation of Bishops met to discuss and accept Henry VIII's three articles on how they would follow his guidelines for Church governance, the Submission of the Clergy.

British History Online documents his resignation and surrender of the Great Seal in the Letters and Papers, Foreign and Domestic, Henry VIII, June 1532, 1-15:

Memorandum that on the 16th May 24 Hen. VIII. the Great Seal, being in the custody of Sir Thos. More, chancellor of England, enclosed in a white leather bag sealed with his seal, was delivered into the King's hands in the garden of York Place by Westminster, about 3 o'clock p.m., in presence of Thos. duke of Norfolk, when the said Sir Thomas surrendered his office of Chancellor. And on Monday, 20 May, about 4 p.m., the King, at his manor of Plesaunce or Est Grenewych, in a certain inner chamber near his oratory, took the said Seal out of the bag in presence of Thos. duke of Norfolk, treasurer of England, Henry marquis of Exeter, Henry earl of Northumberland, Rob. earl of Sussex, Steph. bp. of Winchester, Sir Will. Fitzwilliam, treasurer of the Household, Brian Tuke, treasurer of the Chamber, Sir Will. Kyngeston, John Sampson, dean of the Chapel, Thos. Crumwell, keeper of the Jewels, and others of the Privy Chamber; and after inspecting the same, delivered it to Thos. Audeley, whom he ordered to be called keeper of the Great Seal, and to exercise all the functions of the Chancellor in the Chancery, Star Chamber, and Council. And the said Thomas received it, and therewith, in presence of the King, caused to be sealed certain letters patent of the stewardship of the manors of Lewsham and Est Grenewych in Kent granted to Henry Norres, and afterwards replaced it in the bag, and sealed it with his own seal, and retained it in his custody. The King also then made him a knight.

And on Wednesday, 5 June, the first day of Trinity term, the said Sir Thomas Audeley in the Court of Chancery at Westminster took his oath of office as keeper of the Privy Seal. (Form of the oath subjoined.)

About a month later, More wrote to Desiderius Erasmus an explanation for his resignation that emphasized his health:

The thing which I have wished for from a boy, dear Desiderius, which I rejoice in your having ever enjoyed, and myself occasionally,—namely, that being free from public business, I might have some time to devote to God and myself,—that, by the grace of a great and good God, and by the favour of an indulgent prince, I have at last obtained.

I have not, however, obtained it as I wished. For I wished to reach that last stage of my life in a state, which, though suitable to my age, might yet enable me to enjoy my remaining years healthy and unbroken, free from disease and pain. But it remaineth in the hand of God, whether this wish, perhaps unreasonable, shall be accomplished. Meantime a disorder of I know not what nature hath attacked my breast, by which I suffer less in present pain than in fear of the consequence. For when it had plagued me without abatement some months, the physicians whom I consulted gave their opinion, that the long continuance of it was dangerous, and the speedy cure impossible; but that it must be cured by the gradual alterative effects of time, proper diet and medicine. Neither could they fix the period of my recovery, or ensure me a complete cure at last.

Considering this, I saw that I must either lay down my office, or discharge my duty in it incompletely. And since I could not discharge that duty without the hazard of my life, and by so doing should lose both life and office, I determined to lose one of them rather than both. Wherefore, that I might consult the public good as well as my own welfare, I entreated of the kindness of my good and great prince, that from the high office with which (as you know) he honoured me by his incredible favour, far above my pretensions, above my hopes, above my wishes, he should now release me, sinking as I was under the weight of it.

That letter is documented in Henry VIII's State Papers:

1094. More to Erasmus.
Gives an account of his resignation of the chancellorship. Complains of the rapid progress of heretical doctrines, notwithstanding the efforts that have hitherto been made to repress them. Incorrect versions of the Scriptures, and heretical books of all kinds, make their way from Flanders into England. Has replied to several, and does not fear what the result will be with impartial judges. Chelsea, 14 June 1532.
Lat.

2. Erasmus to John Faber, Bishop of Vienne.
Enclosing the above letter, and speaking very highly in praise of More. States that cardinal Wolsey, who was a man of no small ability, said, when he saw no prospect of being restored to favor, that More was the only person who was fitted to succeed him, though he was not partial to More when he was alive. Gives an account of his house at Chelsea, and his family, and their mode of education. Encloses a copy of the epitaph composed by More for himself.
Lat.
Posted by Stephanie A. Mann at 1:00 AM