The First Vatican Council and Infallibility 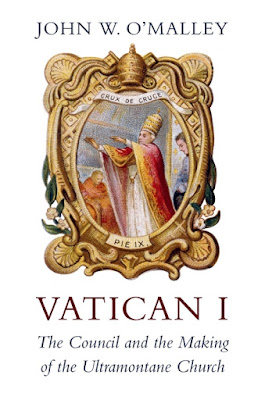 The enduring influence of the Catholic Church has many sources—its spiritual and intellectual appeal, missionary achievements, wealth, diplomatic effectiveness, and stable hierarchy. But in the first half of the nineteenth century, the foundations upon which the church had rested for centuries were shaken. In the eyes of many thoughtful people, liberalism in the guise of liberty, equality, and fraternity was the quintessence of the evils that shook those foundations. At the Vatican Council of 1869–1870, the church made a dramatic effort to set things right by defining the doctrine of papal infallibility.

In Vatican I: The Council and the Making of the Ultramontane Church, John W. O’Malley draws us into the bitter controversies over papal infallibility that at one point seemed destined to rend the church in two. Archbishop Henry Manning was the principal driving force for the definition, and Lord Acton was his brilliant counterpart on the other side. But they shrink in significance alongside Pope Pius IX, whose zeal for the definition was so notable that it raised questions about the very legitimacy of the council. Entering the fray were politicians such as Gladstone and Bismarck. The growing tension in the council played out within the larger drama of the seizure of the Papal States by Italian forces and its seemingly inevitable consequence, the conquest of Rome itself.

Largely as a result of the council and its aftermath, the Catholic Church became more pope-centered than ever before. In the terminology of the period, it became ultramontane.

Introduction
1. Catholicism and the Century of Lights
2. The Ultramontane Movement
3. The Eve of the Council
4. Under Way and Moving toward Dei Filius
5. Infallibility
Conclusion
Appendix: English Translation of Pastor Aeternus
Basic Chronology
Notes
Bibliography
Acknowledgments
Index

I've read Father O'Malley's book on Trent and really look forward to another book that's forthcoming, When Bishops Meet about Trent, Vatican I and II.

Why I read this book now: the Eighth Day Institute's second annual theological conference, this year called the "Florovsky-Newman Week", takes up the subject of authority in the Christian Church. The title and description:

The Patristic View of Authority: Bible, Pope, or Conciliarity?

Co-sponsored by Eighth Day Institute and the Gerber Institute for Catholic Studies, the Florovsky-Newman Week promotes a “return to the sources for Christian unity.” Heeding Fr. Florovsky's advice, rather than simply overlooking differences, this conference seeks to overcome the different views of church authority. And we do so by returning to the common Tradition, by learning to read the Fathers as living masters, rather than as historical documents. Our hope is for you to deepen your understanding of the authority by which the Church grounds her faith and morals, examining authority from our respective traditions as Orthodox, Catholic, and Protestant Christians. Join us for this unique event as we dive into the Church Fathers in order to explore, challenge, and encourage one another to better love God and neighbor.

Note the addition of Blessed John Henry Newman to the title (last year it was just "Florovsky Week"!):

Soon to be St. John Henry Newman, this 19th century educator, poet, pastor, and theologian is considered by many to be the most important (and controversial) figure in the history of England. As a leader in the Oxford Movement, his immersion in the early Tradition of the Church, especially the Church Fathers, led to his conversion from Anglicanism to Roman Catholicism. Cited frequently by Fr. Georges Florovsky, a case can be made that Newman's emphasis on the Fathers was key to the development of Florovsky's ecumenical proposal for a neopatristic synthesis.

As at last year's event, three speakers, one Catholic, one Protestant, and one Orthodox, will make presentations in the evening and weekend plenary sessions. The other speakers will respond: the Catholic and the Orthodox to the Protestant speaker, etc. During the day there are academic paper sessions, time for prayer, meetings at Eighth Day Books, etc. The banquet and presentations on Wednesday through Friday are at Newman University; on Saturday, we move to St. George Orthodox Cathedral.

So anyway, this book is part of my preparation--I've submitted a proposal for a paper, but I haven't received notice officially that it's been accepted--for the conference.

Father O'Malley devotes three of the five chapters to the background of the First Vatican Council, the first Church Council since Trent in the 16th century. He reviews the political and culture situation in Europe, especially in Italy, where the Pope's temporal authority over the Papal States and Rome was in danger in the drive for Italian unity and nationhood. He examines the relationship between Church and the nations in Europe, especially trends like Gallicanism,  Febronianism, and Josephinism through which the state or the ruler controlled education, formation of priests, selection of bishops, monastic and religious foundations, etc. O'Malley's survey in those three chapters thus begins in the eighteenth century, explores the grassroots origins of the Ultramontane movement--meaning grassroots from the laity, to the priesthood, to the academic world, and to the episcopacy--and the pontificate of Pope Pius IX (including the history of the treatment of the popes personally during the revolutionary movements of France and Italy). 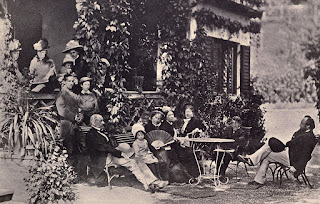 As Deal Hudson points out in his interview with Father O'Malley from April 2018, Pope Pius IX (Pio Nino) does not come off very well in the narration of the events at the First Vatican Council. He and Archbishop Manning and others in the majority Ultramontane party do things that range from the manipulative to the vindictive. They were already in the majority; there was going to be some statement on Papal Infallibility from the Council; they did not need to treat certain bishops so abusively. The two chapters on the events of the Council also point out how much the press, Catholic and secular, especially Louis Veuillot's Univers, not only covered, but influenced the Council. At the same time, Lord Acton, William Gladstone, and Johann Dollinger were gathered (as shown in the picture above) to talk about the Council and its activities, trying to lobby against a decree on Papal Infallibility.

In his Conclusion Father O'Malley discusses the aftermath of the First Vatican Council, including, all too briefly I think, Newman's response to Gladstone's overreaction to Pastor Aeternus. In his interview with Deal Hudson, O'Malley opines that since the decree on the Assumption of the Blessed Virgin Mary, there has been no exercise of Papal Infallibility in matters of faith and morals. But the Church has been more centered on the role of the Pope in the everyday lives of Catholics, with Papal documents, speeches, travels, audiences, etc. One could also argue that the greatest event of the twentieth century for Catholics was the Second Vatican Council, which changed many aspects of daily Catholic life on the local, not Papal, level. Father O'Malley doesn't discuss this, but the long papacy of Pope Saint John Paul II also changed Catholics' view of the pope's role in our lives: his travels, his theological and philosophical influence, the saints he canonized, the reforms he instituted (Canon Law, the Catechism of the Catholic Church, World Youth Day, the Synods of Bishops, etc), his great project of the celebration of the Third Millennium of Christianity, have formed our image of what a pope should be and do.

Highly recommended: except that I think he should have dedicated a few paragraphs to show how Newman's response to Gladstone formed the mainline interpretation of Papal Infallibility and authority.

Note that I purchased my copy of this book.
Posted by Stephanie A. Mann at 12:30 AM