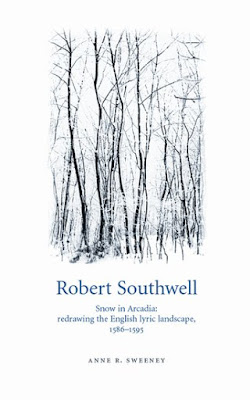 As Gary Bouchard comments in his recently published study of St. Robert Southwell, SJ, it is sad that Anne R. Sweeney died too soon (of cancer) to continue her work on Southwell's life and poetry. She alludes to her illness in the Introduction of this book, Robert Southwell: Snow in Arcadia: redrawing the English lyric landscape, 1586-1595, published by Manchester University Press but distributed by Oxford University Press, which describes Sweeney's achievement in this book thus:

It has traditionally been held that Robert Southwell's poetry offers a curious view of Elizabethan England, one that is from the restricted perspective of a priest-hole. This book dismantles that idea by examining the poetry, word by word, discovering layers of new meanings, hidden emblems, and sharp critiques of Elizabeth's courtiers, and even of the ageing queen herself.

Using both the most recent edition of Southwell's poetry and manuscript materials, it addresses both poetry and private writings including letters and diary material to give dramatic context to the radicalisation of a generation of Southwell's countrymen and women, showing how the young Jesuit harnessed both drama and literature to give new poetic poignancy to their experience.

Bringing a rigorously forensic approach to Southwell's 'lighter' pieces, Sweeney can now show to what extent Southwell engaged exclusively through them in direct artistic debate with Spenser, Sidney, and Shakespeare, placing the poetry firmly in the English landscape familiar to Southwell's generation. Those interested in early modern and Elizabethan culture will find much of interest, including new insights into the function of the arts in the private Catholic milieu touched by Southwell in so many ways and places.

The contents of the book:

Sweeney comments in her preface on her limitations and those who helped her overcome them:

Stonyhurst College kindly made its Library available to my studies, its late librarian, Father Turner, S.J., and the late Bishop Foley, contributing much at the outset to a project that I was so very less qualified than they to embark upon. I am also very grateful that Father Thomas McCoog, S.J., of Mount Street, took the time to look over and comment on aspects of the work, which has, in any case, called much upon his expertise in this area. If I have committed any solecisms against the belief systems of the bodies represented by these gentlemen, it is unintentional, and regretted. I have been acutely aware from the outset that, in discussing a saint from outside the boundaries of religious studies, I was on the thinnest of ice. I hope it is evident that I am addressing discoursal and literary issues only: St. Robert Southwell is beyond all comment spiritually, but as a poet and an Englishman he earned his garlands, I believe. 'Muse not,' as he said, 'to see some mud in cleerest brooke / They once were brittle mould, that now are Saintes.'

Notwithstanding her statement, as I read her study of Southwell I appreciated his religious faith and spirituality more and more. His great efforts to comfort Catholics, reach out to those who had fallen away, confront the state authorities, and challenge other poets to greater things, as Sweeney explicates them, made his love for Jesus and His Church so clear. Because she consults and references his journals and letters as well as his poetry, the reader can see Southwell's struggles in his formation in Rome and his frustrations during his mission in England, sometimes with his Jesuit authorities on the Continent and their decisions. Although this may have been beyond her intent, Sweeney's study made him real to me, not just his poetry, his martyrdom, or his garlands.

Sweeney chose an appropriate motto for the book:

"To live at peace among . . . those who oppose us, is a great grace, and a most commendable and manly achievement." (from Thomas a Kempis, The Imitation of Christ, translated and introduction by Leo Sherley-Price (Harmondsworth: Penguin, 1952, repr. 1979), p. 71)

Southwell's formation as a Jesuit, his experience living in Counter-Reformation Rome, his vocation as priest and avocation as poet, graced him with that peace even in the midst of torture and imprisonment, as reports of his trial and execution attest. 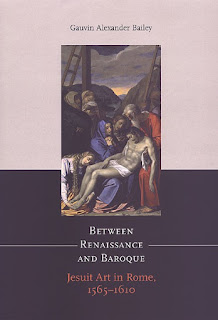 One of the parts of the book that impressed me the most was Sweeney's exploration of the effects of art in Rome on Southwell while he was studying there in combination with his formation with the Spiritual Exercises of St. Ignatius of Loyola--referencing Between Renaissance and Baroque: Jesuit Art in Rome, 1565-1610 by Gauvin Alexander Bailey (University of Toronto Press, 2003). She elucidates how Southwell's formation influenced the brilliant imagery of his poetry, translating ideas into pictures, describing images to symbolize concepts, expressing the transcendent through earthly things in the imagination.

I highly recommend Snow in Arcadia to anyone interested in the era, Southwell, the English mission, Southwell's poetry, the situation of Catholics in England during Elizabeth I's reign, an understanding of the Jesuits in Rome, etc.

As Gary M. Bouchard said, it is sad that Anne R. Sweeney died before she could continue developing her insights into St. Robert Southwell's poetry and his place in English literature. May she rest in the peace of Christ.

My review of Bouchard's Southwell's Sphere: The Influence of England's Secret Poet is forthcoming.

UPDATE: note that I purchased my copy of Snow in Arcadia.
Posted by Stephanie A. Mann at 12:30 AM