Blessed Margaret Pole, Pray for Us!

Blessed Margaret Pole's early life was greatly affected by the dynastic battles of the Wars of the Roses; her adult life by the English Reformation, and she would die because of her clear loyalty to the universal Catholic faith. She was martyred on May 27, 1541, but her feast day is May 28 since St. Augustine of Canterbury is honored on May 27.

She was born Margaret Plantagenet, the niece of Edward IV and Richard III; her father was George, the Duke of Clarence and her mother Lady Isabel Neville, the Duchess of Clarence. Since her father was attainted a traitor during the reign of Edward IV, so the family lost their lands; she and her surviving sibling, Edward, were also removed from the line of succession by Richard III. Her mother had died when she was three; her father when she was five. 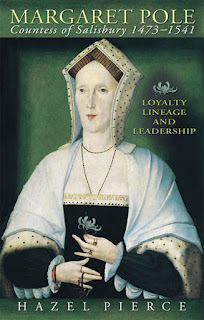 With the fall of Richard III and the House of York, she was in greater danger. Her brother Edward Plantagenet was imprisoned in the Tower of London from 1485 to 1499, when he was executed. Henry VII arranged her marriage to Sir Reginald Pole about 1491 and she bore four sons, including the future Reginald Cardinal Pole, and one daughter. Margaret was widowed in 1504 and had to live with the nuns of Syon Abbey for a time because of the loss of her husband's income. When Henry VIII succeeded he named her the Countess of Salisbury, restored her family's lands, and appointed her governess to Princess Mary, daughter of Henry VIII and Queen Catherine of Aragon.

In loyalty to Catherine, she opposed Henry’s marriage to Anne Boleyn, and the king exiled her from court, although he had called her “the holiest woman in England.” When her son, Reginald Pole, denied Henry’s Act of Supremacy, she remonstrated with him and tried to assure the king that she repudiated his treason completely.

In 1538, her son Henry Pole, Lord Montague was executed for treason and her other surviving son, Geoffrey was also arrested and found guilty of treason and was pardoned, but the king imprisoned Margaret in the Tower of London for two years and then had her beheaded on May 27, 1541. She was never given a legal trial, but included in an Act of Attainder that accused many of treason on quite flimsy grounds, mostly on the suspicion of opposing the King's religious supremacy. Margaret Pole was devoted to the Five Wounds of Jesus; the Pilgrimage of Grace proceeded under banners emblazoned with the Five Wounds of Jesus; therefore, the flawed logic was that her devotion proved her support of  rebellion. Never mind that devotion to the Five Wounds of Jesus was popular throughout England in the 16th century. Her sons' opposition to Henry's marital and ecclesial efforts was enough. She rightly protested against the lack of due process and there are various reports about how horrible her execution was: certainly the headsman was incompetent. 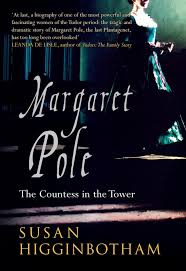 She was seventy when she was martyred in 1541. Margaret was beatified in 1886 by Pope Leo XIII. She is buried in the Chapel of St. Peter ad Vincula in the Tower of London. Margaret Pole had planned a resting place for herself in what is now Christchurch Priory in what was, before 1539, an Augustinian Priory, in the Salisbury Chantry, where Masses would be said for the repose of her soul. More on her life and times here. Her daughter Ursula had married Henry Stafford, who was the eldest son of Edward Stafford, the Duke of Buckingham executed on May 17, 1521 for treason. Ursula and Henry survived the double blows of two parents beheaded for treason against Henry VIII, and Stafford was named Baron Stafford during the reign of Edward VI. One of their sons, Thomas, would also lose his head after participating in the Wyatt Rebellion against Mary I.
Blessed Margaret Pole's other son, Reginald Cardinal Pole, returned to England in 1554 to reconcile the English church and nation to the Catholic Church and the Papacy, becoming the last Catholic Archbishop of Canterbury in 1556. He died two years later and is buried in Canterbury Cathedral. You may read my review of her standard biography, Margaret Pole, Countess of Salisbury 1473-1541: Loyalty, Lineage and Leadership by Hazel Pierce here. I also reviewed a more recent biography by Susan Higginbotham here.

One of my favorite passages from a book about Blessed Margaret Pole comes from Dom David Knowles' Saints and Scholars: Twenty-Five Medieval Portraits. In the chapter on William More, the Prior of Worcester, he describes a visit of Princess Mary, Margaret Pole, and her sons, except for Reginald:

The imagination rests for a moment on the guest-hall at Worcester that year. England in 1526 must still have been a settled country with the future predictable, when Anne Boleyn and Thomas Cromwell were still in private places, and the sword that was to divide kinsmen so sharply lay still sheathed. Yet the four visitors who sat there with the prior were all to know sorrow, and were all in their fashion to suffer, or to cause suffering, for their faith. The Countess and her elder son were to perish at the hands of the executioner, while the younger son was to die in exile haunted by the disaster that he had helped to cause. They must often have spoken of the absent brother, Reginald, also in part to be the cause of their fate, who was himself to die, a prince of the Church, on the same day as the little girl, his cousin, each of them alone in the new, harsh world which they had hoped to sweeten, but had only the more embittered.

I do not think that Blessed Margaret Pole had really done anything to embitter the world. It had been harsh when she was born and she had tried to sweeten it through her faith, her devotion to the Princess Mary, and her efforts to remain loyal to both Henry VIII and the Catholic Church.

Blessed Margaret Pole, pray for us!
Posted by Stephanie A. Mann at 12:30 AM