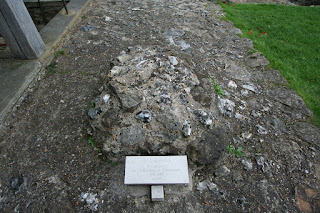 St. Augustine of Canterbury's Grave in the
Ruins of the Abbey Church of his Monastery
Image Credit

Since today is the feast of St. Augustine of Canterbury, it seems appropriate to post some comments on the gifts given to the Anglican Archbishops of Canterbury by Pope Paul VI and Pope Francis, noted in this article in The Catholic Herald. When Michael Ramsey visited Pope Paul VI at the Vatican in 1966, Pope Paul gave him a gift of a ring from his own finger:

Many Anglo-Catholics inferred that the ring was the Pope’s way of tacitly repudiating Pope Leo XIII’s papal bull Apostolicae Curae, which declared Anglican orders “absolutely null and utterly void”. Whatever Paul VI meant by it, it was a dramatic gesture of the kind of recognition of Christian brotherhood that was described by Vatican II’s Decree on Ecumenism, Unitatis Redintegratio, from 1964. The two men issued a common declaration, and an official Anglican-Catholic dialogue was born. At a celebration in Rome in 2016 to mark the 50th anniversary of the event, Pope Francis gave Archbishop Justin Welby a replica of the crozier of St Gregory the Great, who commissioned Augustine, later the first Archbishop of Canterbury, to re-Christianise Britain in 595.

Gift-giving has become expected. But ecumenism between Catholics and Anglicans has not succeeded in the way Ramsey and his generation originally imagined.

According to this article, Ramsey was quite moved by the gesture and wore the ring for the rest of his life. Subsequent Archbishops of Canterbury have worn the ring when meeting with the Pope. The article includes a picture of the ring.

The author of The Catholic Herald article is a former Episcopalian priest, Andrew Petiprin. He cites a comment that Ramsey made about Newman that surprised me:

For those still committed to the success of dialogue in bringing about corporate reconciliation, however, individual defections from the Anglican Communion to the Catholic Church are deemed unfortunate. By the end of his life, Ramsey went so far as to tell American seminarians about the “final tragedy” of John Henry Newman’s conversion in 1845. He regarded Newman as having made a selfish, pre-ecumenical mistake in leaving behind the English Church of his baptism and ordination. Strangely, Ramsey imagined the way for Newman to solve the dilemma of not feeling Catholic enough was to double down on being more Anglican. “He had not quite got historic Anglicanism into his bones,” he said, “and he came to it rather as one who is fulfilling deep personal needs of his own.”

As I've been preparing for my Newman presentation at the Eighth Day Institute's Florovsky-Newman week the first week of June, I'd reread Henry Cardinal Manning's opinion of Newman, which flatly contradicts Ramsey:

"I see much danger of an English Catholicism of which Newman is the highest type. It is the old Anglican, patristic, literary, Oxford tone transplanted into the Church." (Ian Ker, John Henry Newman: A Biography (Oxford: Oxford University Press, 1988), p. 609).

Newman became a Catholic, not for some selfish reason, but because he believed the Catholic Church was the one, true fold of Christ, the Church Jesus had established. Like St. Augustine of Canterbury, he was a Catholic because, as Andrew Petiprin's book title says, Truth Matters.

St. Augustine of Canterbury, pray for us!
Posted by Stephanie A. Mann at 12:30 AM