Will Ye No Come Again? A Portrait of Bonnie Prince Charlie

A genuine and acceptably bonny portrait of Bonnie Prince Charlie has been rediscovered, by the remorseful art historian who broke hearts in the Scottish souvenir industry by debunking the best-known portrait of the national hero, immortalised on countless tins of shortbread.

The long-lost portrait of the pink-cheeked prince was painted in Edinburgh in 1745 by one of Scotland's most renowned artists, Allan Ramsay, in the year the Young Pretender, grandson of the deposed Stuart king James II, launched a doomed invasion of England in an attempt to restore his family to the throne. It is the only known portrait of the prince made in Britain: the butchery of the battle of Culloden ended the Jacobite rebellion, Charles spent the rest of his life in exile, died in 1788 and was buried in Rome.

"Such a great image," Bendor Grosvenor said fondly of his discovery, which he tracked down from an old photograph to Gosford House, the family home of the Earls of Wemyss, just outside Edinburgh. "It gets the confidence of a man who wanted to invade England at the age of 24."

You may see the portrait at The Guardian site. When Bendor Grosvener opined that a famous portrait of Bonnie Prince Charlie (seen at right) was really of his brother Henry Benedict, later Cardinal, Stuart, he really upset the apple cart, as this BBC article demonstrates:

Now a leading expert believes the pastel might be Prince Henry Benedict instead of Charles Edward Stuart.

The gallery said it was not uncommon for re-attributions to be made.

It follows a two-year row over the identity of the man in the painting since London art dealer Bendor Grosvenor claimed it was not Bonnie Prince Charlie.

At first the gallery dismissed the claim citing expert on Jacobite portraiture, Dr Edward Corp of the University of Toulouse, France, in its defence.

However, Dr Corp has now changed his opinion in an article in the latest issue of The British Art Journal.

He said: "'The weight of evidence, perhaps regrettably, supports Bendor Grosvenor's argument that the pastel in the Scottish National Portrait Gallery shows Prince Henry rather than Prince Charles." 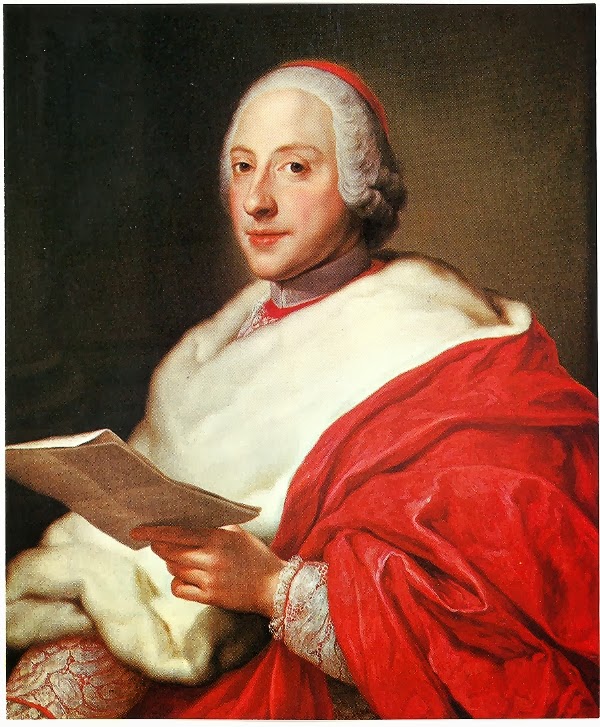 I think when you compare that portrait above to this of the Duke of York as Cardinal York, the resemblance is clear. Part of the reason experts thought it could not be Henry was that he was a Cardinal by 1747--but he had been in command of the naval expedition of the '45, and evidently both he and his elder brother had sat for portraits by Maurice Quentin de La Tour.

As Dr. Corp noted, this re-attribution was a really big deal:

"It is not merely the catalogue of the Scottish National Portrait Gallery which needs to be corrected.

"The impression which an entire nation has derived of this important historical figure should also be changed.

"The portrait is now reproduced in all biographies of the prince, and has been selected to illustrate the article about him in the Oxford Dictionary of National Biography."

Still the real search is for a portrait of Bonnie Prince Charlie by Maurice Quentin de La Tour painted around the same time as this painting of Henry Benedict, the Duke of York.

More on the Scottish National Portrait Gallery here.
Posted by Stephanie A. Mann at 12:30 AM