The Middle Ages Weren't That Dark/The Renaissance Wasn't That Bright 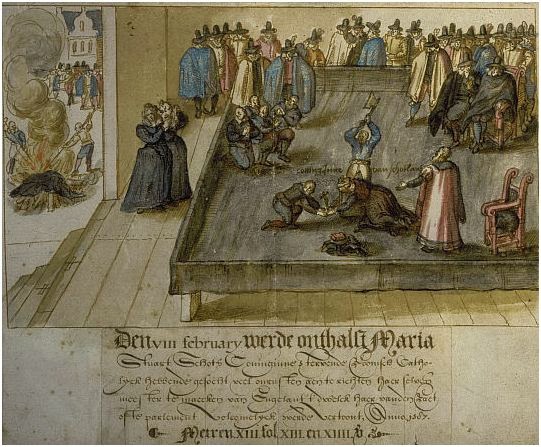 I'm reading G.K. Chesterton's The Thing, as I mentioned, and I think he would appreciate this article, which turns the tables on the usual paradigm re: the Middle Ages and the Renaissance. That table turning is something Chesterton does all the time.

First, the article, from The Telegraph by Dominic Selwood, "The bloody underside of the 'civilised' Renaissance":

If you looked only at the luscious paintings by Fra Angelico and Botticelli, and if you listened only to the soaring ethereal voices of Palestrina and Byrd, you would think the Renaissance was a release of centuries of pent-up creativity. You would conclude, as was once fashionable, that when the Renaissance detonated in late 1300s Italy, it sprayed hope, colour, and sensuality into a monochrome and rigid medieval world grappling with a plague that had slain a third of Europe. [In case you think Selwood is exaggerating, remember William Manchester's A World Lit Only by Fire.]

But you would be wrong for many reasons.

For starters, there was nothing monochrome about the medieval world. You need only look at the extraordinary renovations now under way at Chartres cathedral, where they are restoring the hulking grey walls and statues to their former brightly decorated brilliance, injecting a vibrancy that those who grew up with 1960s architecture can barely take in.

Equally as importantly, there was a lot the Renaissance, for all its splendour, left unchanged. It may have been a celebration of living rather than earthly preparation for an afterlife, but it did not immediately improve life for everyone. For example, as the oligarchs of the day splashed their immense wealth around, patronizing works and monuments to their eternal glory, the majority of the population remained bound to the unforgiving and harsh drudgery of subsistence level agricultural and artisanal life.

We sometimes have a slightly deluded view of the period, seeing it as the dawning of a civilised age of "high culture", with an intense new focus on art, writing, and music – quite unlike anything that had gone before.

Selwood goes on to comment on two horrible executions--dark highlights of the Renaissance--that of Girolamo Savonarola (mentioned in the context of the anniversary of his "Bonfire of the Vanities" on February 7, 1497) and the other of Mary, Queen of Scots on February 8, 1587.

As he describes Savonarola's end: 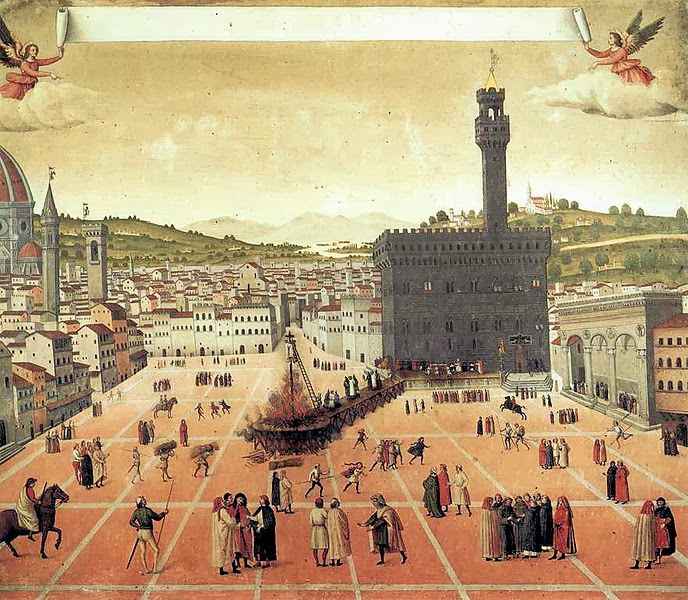 In the time-honoured fashion, a kangaroo court was duly convened. Savonarola and his two most loyal fellow Dominican friars were first tried by civil judges, then by Church commissioners, although neither result was ever in doubt. As one of the judges noted before the trial, “We shall have a fine bonfire tonight.”

The three priests were quickly convicted, sentenced, stripped, walked over spikes, then hanged and burned in the central Piazza della Signoria. The once-adoring Florentines danced around the pyre, and the city’s children threw stones at the burning corpses.

And then he describes the execution of Mary, Queen of Scots (illustrated above):

It was a tawdry affair. Mary was not permitted a priest of her religion, so said her own prayers quietly in Latin. She remained poised and calm. Among her last words, she forgave her executioner with all her heart because “now, I hope, you shall make an end of all my troubles”.

The first blow with the axe missed her neck and took off part of her head. The next was not hard enough, But the third finally severed her neck. Her dog, bloodied by the gore, lay between her head and shoulders, refusing to be parted from her. According to an eye witness, “her lips stirred up and down a quarter of an hour after her head was cut off”.

As a final insult, her request to be buried in Rheims was overruled, and she was given a Protestant funeral in Peterborough.

Read the rest of the article here (which also ties in the forthcoming visit of Queen Elizabeth and Pope Francis at the Vatican).

Now, for Chesterton's turning the tables: in an article titled "The Early Bird in History", Chesterton notes "there's a common and current charge against the Catholic Church, that she is, as the phrase goes, always behind the times." 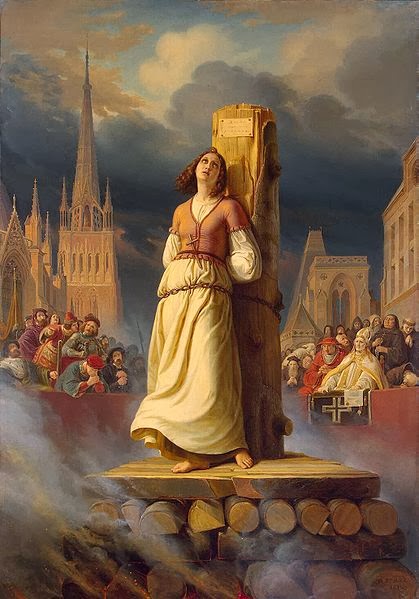 Not that there's anything wrong with that, he says, when you consider the times, but then he notes at least one instance in which the Catholic Church was far ahead of anyone else and in ways that no other institution had caught up with (in 1929, at least). He examines the rehabilitation of St. Joan of Arc. Chesterton notes that her canonization may have taken centuries, but her rehabilitation did not. The Church investigated, acknowledged the injustice, and cleared her name during the lifetime of her family-- of her mother.


Then Chesterton considers some other cases: Did Edward III repent of the brutal execution of William Wallace by Edward I?  Did Elizabeth I rehabilitate Sir Thomas More, acknowledge the error of his trial, conviction, and execution as a traitor? Of course they did not.

He acknowledges that in the 19th century the English did "make a romance about Wallace" and finally start thinking of St. Joan of Arc with more favor and recognition of their own tawdry role. (Shakespeare's depiction of Joan, he notes, features "insular insults".)

Chesterton has two more historical parallels: have the English honored Daniel O'Connell, the catalyst of Catholic Emancipation within one hundred years of that great milestone (1829-1929)? Have they accepted Robert Emmet of Ireland as well as they've accepted George Washington of the United States of America? No--in 1929, they had not. Thus, Chesterton demonstrates that the Catholic Church was not so far behind the times as "people" say, and in fact, the secular world is really far behind in the process of acknowledging past injustices.

You've have to read the rest of the essay, particularly as Chesterton cites how far ahead of their times the Jesuits were!

Next week, I might have to share what Chesterton writes about Dean Inge and Thomas More--it's funny, true, and surprising at the same time.
Posted by Stephanie A. Mann at 12:30 AM