A Hidden Masterpiece on Display 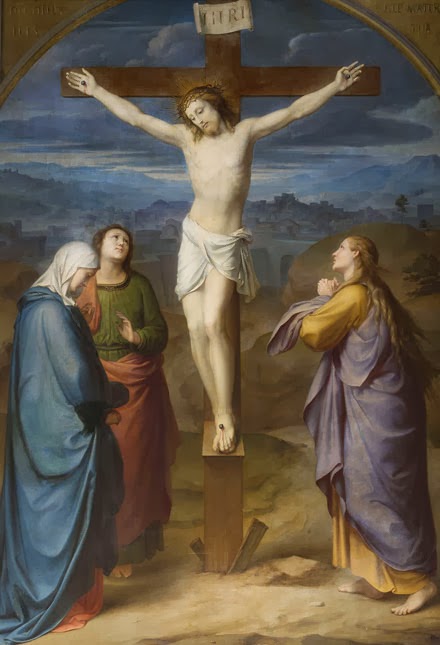 From UK's The Catholic Herald comes this story about Franz von Rohden's 1854 Crucifixion (pictured above; used by permission), which was in a closet at Ushaw College since sometime in the 1970's:

A painting that was kept in a closet at Ushaw College for 30 years and is hailed by scholars as a masterpiece has gone on display for the first time.

The work, by the German painter Franz von Rohden, was hung in a chapel at the junior college until the 1970s, when it was put in storage.

It was discovered following the closure of the seminary in 2011.

The painting had been commissioned in the 1850s by Mgr Charles Newsham, the president of Ushaw, who wanted it for private devotion.

On the advice of Cardinal Wiseman he had sought a painting from the Nazarene school – a group of German artists who moved to Rome to emulate pre-modern masters of the 15th century.

This exhibition focuses on a rare and largely neglected masterpiece by the Nazarene artist Franz von Rohden (1817-1903) currently preserved at Ushaw College. The painting, which depicts the Crucifixion of Our Lord with the Virgin Mary, St John and Mary Magdalene (1854), exemplifies the artistic creed of the Nazarene school of painting, founded in Rome by a group of dissident German artists in the early nineteenth century and characterised by the radical recourse to the pictorial repertoire of Italian pre-modern masters. While still relatively unknown in England today, the Nazarene movement exerted a tremendous influence on European Romanticism, the Gothic Revival and the British Pre-Raphaelites. . . .


The painting has never left Ushaw College and is here exhibited to the wider public for the first time. While still in progress in Rohden’s Roman atelier, this exquisite painting had already become a sensation. Its first admirers called it ‘a miracle of art and a most devotion-inspiring picture’ and elected it as ‘the finest picture of the subject that ever was painted’. The recourse to Nazarene art was suggested to Newsham by Ushaw’s most illustrious alumnus, Cardinal Nicholas Patrick Wiseman (1802-1865). The need to go to Rome, for the acquisition of artistic objects to adorn the college, coincided with the need to turn to the Holy See for the acquisition of sacred objects charged with a particular devotional energy. Nazarene artists, such as Rohden, suitably fulfilled this need.

More about the Nazarene Movement in religious art here. Rather like the naming of the Metaphysical Poets (per Samuel Johnson), the Nazarene name was given as a negative commentary on their style.
Posted by Stephanie A. Mann at 12:30 AM