The Life and Works of St. Robert Southwell 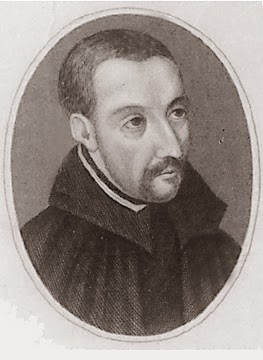 Here's an excellent overview from The Poetry Foundation of St. Robert Southwell's life and literary works --and his brave endurance and execution:

Robert Southwell was born around 1561 at Horsham St. Faith, Norfolk, the youngest son and fifth child in a family of eight. The Southwells, a county family that had prospered from the dissolution of the monasteries, formed part of a network of wealthy, interrelated families that included the Wriothsleys, Howards, Bacons, and Cecils as well as recusants such as Vaux, Arden, and Copley. Southwell was a studious boy whose father liked to call him "Father Robert." In 1576 Southwell, like many other boys of his class, was sent overseas to be educated in the Jesuit school at Douai. He would not see England again for ten years. Between the ages of fifteen and seventeen he became convinced of his vocation to a religious life, and in 1578 he was admitted to the noviceship at Rome, where he embarked upon his formation as a Jesuit. In 1581 he transferred from the Roman to the English College, where he became tutor and perfect of studies. He was ordained in 1584 and was sent on the English mission in 1586, landing secretly with his fellow Jesuit Henry Garnet somewhere between Dover and Folkestone in early July. He was about twenty-five years old.

Christopher Devlin estimated a Catholic priest's chance of survival in England in 1586 as one in three. Southwell led the active but disguised and secret life of a pastor for six years, working mostly in and around London except for some journeys into the Midlands. For much of this period he lived under the protection of Anne, countess of Arundel, whose husband, the earl, was a prisoner in the Tower of London. In June 1592 the notorious priest hunter Richard Topcliffe succeeded in capturing Southwell. Topcliffe, Elizabeth I's servant and favorite, "an atrocious psychopath," in Geoffrey Hill's words, was allowed to torture prisoners in his own house. Southwell was in this man's hands and then in the hands of Privy Council interrogators and torturers for a month; news of his transfer to solitary confinement in the Tower was a relief to his friends.

After more than two years' imprisonment he was moved to the notorious cell in Newgate called Limbo, and his trial took place on 20 February 1595 under the statute of 1585, which had made it treason to be a Catholic priest and administer the sacraments in England. He was found guilty and was executed the next day by hanging, drawing, and quartering. At his trial Southwell said that he had been tortured ten times and would rather have endured ten executions. Pierre Janelle, who quotes the records in detail, writes that Southwell made of his trial and execution "a work of art of supreme beauty." He was thirty-three at his death. Pope Paul VI canonized him on 25 October 1970 as one of the Forty Martyrs of England and Wales.

Remember that I'll be on the Son Rise Morning Show, produced by Sacred Heart Radio for the EWTN Radio Network, around 7:45 a.m. Eastern/6:45 a.m. Central to discuss this great saint, poet, and martyr.
Posted by Stephanie A. Mann at 1:00 AM