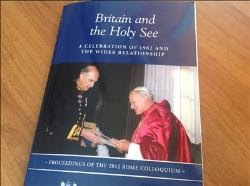 In 2012, Britain and the Holy See celebrated 30 years of uninterrupted diplomatic relations with a conference at the Venerable English College in Rome. According to a Catholic News Agency article at the time:

Today [March  30, 2012] the United Kingdom marked 30 years of full diplomatic relations with the Holy See with a one-day conference in Rome.

During his introductory remarks on March 30, U.K. Ambassador Nigel Baker called 1982 “a red-letter year in the relationship between Britain and the Holy See.”

The year “saw the establishment of bilateral diplomatic relations at ambassadorial level and the United Kingdom, for the first time, welcomed a reigning Pontiff – Blessed Pope John Paul II – to its shores.”

The day-long event, which was hosted by Rome’s Venerable English College, was titled “Britain and the Holy See: A Celebration of 1982 and the Wider Relationship.” With the assistance of numerous contributors, it attempted to review the events of 30 years ago and assess their historical, diplomatic and ecumenical impact.

Vatican Radio recently talked to Nigel Baker, the current U.K. ambassador to the Holy See, about the publication of the proceedings of that 2012 conference:

Celebrating Britain’s relations with the Holy See: that’s the goal of a glossy new publication bringing together contributions from Catholics and Anglicans, clerics and diplomats, professors, historians and ecumenical experts.

The book looks back to Pope John Paul II’s historical visit to Britain in 1982, as well as Pope Benedict’s state visit in 2010, tracing progress on both political and religious fronts. But it also recalls the darker days of division and alienation that lasted for four and a half centuries before John Paul’s groundbreaking pastoral visit.

To delve deeper into its pages and the story it tells, Philippa Hitchen sat down with Britain’s current representative to the Holy See, Ambassador Nigel Baker.

You may listen to the interview here.

"During the colloquium I reminded people that this our oldest embassy, our embassy to the Holy See. The first resident British ambassador – English ambassador, at the time – was sent on mission in 1479 by King Edward IV. […] So when you get into context, talking about the Britain – Holy See relationship, you have to go back a long way in history and look at the impact of history, how we’ve got to where we are now.

"I think sometimes people can get confused. I always tell people I am accredited to the Holy See, which means the global Catholic network, the governance of the global Catholic Church. And I think people quite quickly realise that’s quite a different beast from a bilateral ambassador to, for example, the republic of Italy. In the colloquium and in the book we have presentations from two British cardinals, who remember the visit of Pope John Paul II vividly; we have Scottish, Welsh and English contributions; important contributions about the ecumenical relationship – both an Anglican bishop and an official of the Holy See talking about the relationship between Catholicism and Anglicanism. And I think all of these add to that complex mix which is the relationship between Britain and the Holy See, which goes far beyond the sometimes rather transactional relationship that ordinary bilateral relationships can be.”

Amazon.com has an entry for the booklet, but does not have it in stock! I am still searching.
Posted by Stephanie A. Mann at 12:30 AM