The English Reformation at Salisbury Cathedral 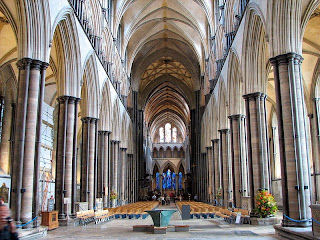 Salisbury Cathedral will host a Winter Lecture Series focused on the English Reformation and how it transformed the church in England:

Salisbury Cathedral’s Winter Lecture series, which runs from October 2013 – March 2014, focusses (sic) on the Reformation and immediate post-Reformation period when the church in England developed into a uniquely national church. The six eminent speakers will explore different aspects of what happened and why. The final lecture, which takes place in Lent, will consider Easter, looking at the Biblical authority for the festival and how the modern church will be celebrating the events of Holy Week.

The series begins on Friday 18 October with Trevor Cooper describing What happened to English parish churches after the Reformation? On Monday 18 November Giles Mandelbrote speaks on The Making of the English Bible. On Tuesday 7 January Tim Tatton-Brown discusses Salisbury Cathedral and the Reformation – the architectural changes. The lecture on Tuesday 25 February has Timothy Hone looking at Reformation Music and all who attend this lecture are invited to attend Evensong at 5.30pm during which the music will link with the lecture. The series ends on Tuesday 25 March with David Catchpole and Tom Clammer exploring Easter: the biblical tradition and the modern liturgy.

The Cathedral's news release for the series contains some great details about each lecture, for example:

Reformation Music - Timothy Hone Timothy Hone explores the changing religious positions of the sixteenth and early seventeenth centuries, and considers the musical developments which occurred, not just in the context of the Chapel Royal, but to see what might have happened in the provincial cathedrals and at Salisbury in particular. We will see how two extreme positions, during the reigns of Edward VI and Mary, found a balance during the reign of Elizabeth I. In particular, we will look at the music of Tallis and Byrd whose compositions reveal a conflict between their public music for the Anglican rite and their own private faith, revealed in much of their music with Latin texts.
Timothy Hone came to the Department of Liturgy and Music at the Cathedral after 25 years as a Cathedral musician. His interest in the relationship between music and liturgy began as an undergraduate when his dissertation on the Laudian revival at Peterhouse, Cambridge (where he was Organ Scholar) was awarded the William Barclay Squire Prize. He uses insights from his practical experience to put research into context, combining insights from a number of academic approaches.

The first speaker, Trevor Cooper, is with an organization looking at the past, present, and future of churches in England, including concerns about how historic Anglican churches (many of which were once Catholic churches) can be maintained as congregations decline.

This looks like a fascinating series. The lecture I chose to highlight would be my choice to attend, with Choral Evensong of Tallis and Byrd selections.

Image credit: wikipedia commons.
Posted by Stephanie A. Mann at 6:39 AM